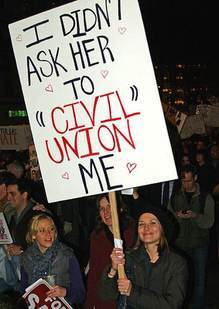 Republican leaders in Colorado have formed a group called Coloradans for Freedom to fight for civil unions there.

"The point is not to create conflict within the Republican Party," one of the organizers, local attorney Mario Nicolais, told the Denver Post. "It is to provide resources to people interested in the conservative argument for civil unions."

Civil unions passed the state's Senate last year, but were squashed by a House panel, setting the stage for another legislative fight for the upcoming session. As lawmakers return to work, Coloradans for Freedom will hold a cocktail party headlines by former State Rep. Rob Witwer, a high-profile advocate for civil unions who frames his arguments as a matter of "human freedom."

Discussing the new organization, Witwer used distinctly "choice" oriented language. "In my mind, there's nothing inconsistent with being a Republican and supporting the rights of gay people to live as they choose," he said. "I would like gay people who believe in limited government and fiscal responsibility to know they still have a home in the Republican Party."

Some Democrats are also supporting the fight. Colorado House Minority leader Mark Ferrandino remarked, "I'm glad to see a group of leaders on the right coming out and saying, 'If we are for limited government, we should be for civil unions.'"

"It can't do anything but help the chances of a civil unions bill passing this year."

While it's nice to see Republicans flexing their muscle for equality, this still misses the mark a bit. Civil unions, we know, are separate and unequal from marriage rights, and it would be far more uplifting — for me, at least — to see GOP, Democrats and others join forces to overturn the 2006 law that banned same-sex marriage in Colorado. That would be a far more impressive and monumental effort, one more in line with "freedom" than civil unions.