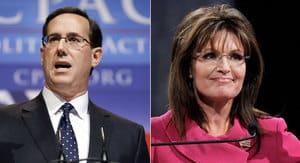 Team Fox News appears to be lining up behind Rick Santorum ahead of today’s Iowa Caucuses.

Appearing on Fox yesterday, Palin, after being prompted by the host, insisted she respects Santorum because he puts his religion first, but, according to her, not in a “judgmental or condemning way.”

“He talked about America’s Judeo-Christian foundation, how important it is that we stand strong on it and that we build upon it,” she said. “Not in a judgmental, condemning way when it comes to anybody’s lifestyle.”

Perhaps Palin is thinking of a different Rick Santorum, because I seem to recall the candidate comparing same-sex love with bestiality, consistently using his power to oppress LGBT people and generally being a complete homophobe.

Or maybe she just doesn’t know what the word “judgmental” means, which very well may be the case.

Watch Palin praise Santorum, if you dare, AFTER THE JUMP.