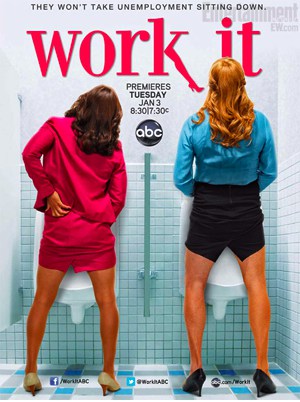 Condolences to Ben Koldyke and Amaury Nolasco, erstwhile stars of ABC's cross-dressing comedy, Work It, which ABC is reporting has been canceled after only two episodes.

Towleroadians will recall the weird furor inspired by the series last month, when ABC published a promo poster for Work It featuring two men in drag hoisting up their skirts at a urinal — a tone deaf image, which either attempted to capitalize on or demonstrated a woeful ignorance of the ongoing debate in the United States about gender and public accommodations. But it wasn't a lack of political correctness that sunk Work It; it was a lack of audience. The show's debut drew an anemic 6.1 million viewers, and the next episode saw a 20% falloff. Work It will be replaced in its timeslot by reruns of Tim Allen's Last Man Standing.