Tennessee's "Don't Say Gay" bill is back and will be discussed in Tennessee General Assembly's Education Subcommittee on Wednesday, Nashville Scene reports. 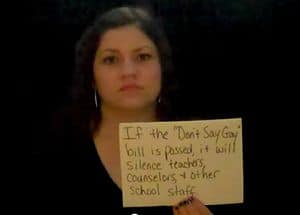 Nashville's Out & About Newspaper adds that it will be met by a protest:

Organized by the Tennessee Equality Project’s (TEP) Nashville Committee, the event will bring students, parents, and concerned citizens from around the state to Legislative Plaza to show widespread opposition to a bill that continues to draw national media attention to Tennessee.

“The very existence of this bill sends a bad message about Tennessee at a time when we should look at constructive proposals to make schools safe, welcoming places for all students,” according to TEP Nashville Committee Chair Chris Sanders. “The fact that this is the one of the first bills debated this year makes the citizens of Tennessee wonder how serious our Legislature is about improving our schools.”

Check out the protest page HERE. An online petition opposing the bill is HERE.

A mother's thoughts on the 'Don't Say Gay' bill, AFTER THE JUMP…