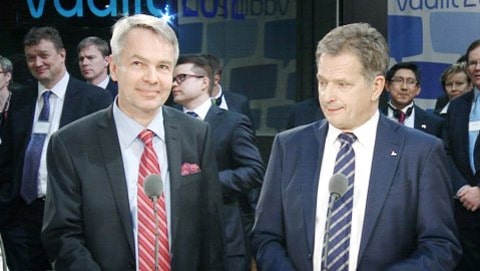 Pekka Haavisto (above, left), an out gay member of Finland's Green Party, is in a run-off election against Sauli Niinisto (above, right) to serve as the nation's President, the AP reports:

The conservative favorite easily won the first round of Finland’s presidential election Sunday, setting up a runoff against an environmentalist leader who is the first openly gay candidate to run for head of state in the Nordic country.

Sauli Niinisto, a former finance minister, won 37 percent of the vote, well ahead of the other candidates but short of the majority needed to avoid a second round, official preliminary results showed.

With all votes counted, Pekka Haavisto, of the Greens party, was second with 18.8 percent, securing his place in the Feb. 5 runoff. 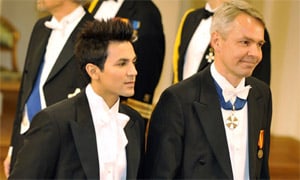 Here's Haavisto with his husband (or 'registered partner' as they call it in Finland, Antonio Flores (right).

A Finnish reader, Kodekon, writes in to Towleroad about what's happening:

Haavisto will be against Sauli Niinistö, who has been the front runner during the whole presidential campaign, and who is widely believed to win the election in the end. Although nothing is certain yet 😉 The commentators noted that Haavisto's success probably came from people being fed up by the sudden rise in the last parliamentary election of populist party True Finns (actually they changed their English name to be just "Finns"; another populist move which annoyed lot of people here) who have been known to be e.g. conservative, anti-gay and anti-immigration. Even though True Finns got almost 20 % of votes in the parliamentary election their candidate and party leader Timo Soini only got 9,4% of the votes today. Hopefully True Finns are losing steam because even if they appear to be fighting the cause of the poor (and thus being on the left side of the politics here) they also have quite vocal right wing part, that has talked openly about hating muslims and gays, and all that bullshit. I have to point out, though,that we are talking about Finland which is one of the most peaceful countries in the world, and our political parties are quite mild when compared to some other countries 🙂 True Finns have brought out a dangerous hate speech to the front, but still it's pretty mild.

Pekka Haavisto, who is a seasoned politician and has worked for United Nations before coming back to being a politician in Finland, has been seen as a man of peace and a bridge builder between different political parties and he famously visited a gay hating True Finn Member of Parliament to try to show him that gays are normal people. I have to add, though, that the True Finn MP in question, Teuvo Hakkarainen, spoke against the gays earlier in heated tone because some Finnish bears declared publicly that he was sexy. Teuvo got upset because of that and called a news paper to inform that he wished all the immigrants and all the gays should be shipped to an island and let them live there by themselves. He later said that he spoke in anger but this was actually just one his public faux pas since he's a rookie in politics and doesn't quite know how to behave.

But I have to say that although we Finns are pretty tolerant people the homosexuality is still not as public as it should be. Even if we have for decades had quite visible public gay figures it hasn't been until the last few years that general public has been shown that being gay is ok through coming out by some popular singers etc. Many people do hope that Pekka Haavisto will be the next president so the general acceptance of homosexuality would get much higher. But personally I'm afraid that there's just too much opposition from the old people and such to vote for a gay president.

More on the election here, from a Finnish paper. The second round takes place, as mentioned above, on February 5.