Ryan Gosling isn't doing anything this weekend. If you wanna ride or something.

Did you ever get around to seeing Ryan Gosling in DRIVE?

It's out today on DVD and Blu-Ray. The movie sparked idiotic lawsuits, generated a ton of fan art, and became one of the most divisive movies of the year. People loved it or hated it which means it'll stick around; passion fuels endurance in pop culture.

One of the best scenes is an unofficial date between the driver (Ryan Gosling, sensational) and his neighbor Irene (Carey Mulligan). Her car has broken down. "Hey, do you wanna see something?" he asks and takes her and her son to an empty closed down highway for a leisurely fun drive. Much of the movie takes place at night but this scene is so brightly lit that Irene has to squint. It's not just the sunlight. Gosling is glowing like a golden god. By the end of the date he's carrying her sleeping son over his shoulder back to her apartment and Irene is absolutely smitten. (She wasn't alone… ovaries were exploding everywhere.) Showing the greatest willpower I've ever seen onscreen — you're sending him home? — she hands him his jacket to leave. Yes, that jacket. In the softest voice that could possibly come from such a hard man he whispers:

I'm not doing anything this weekend if you wanna go for a ride." 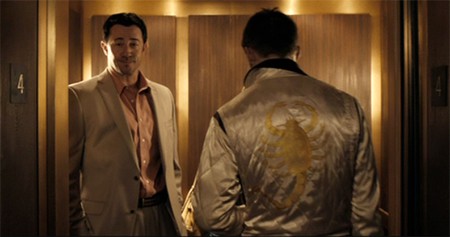 Who wouldn't take him up on that? Guess how much that jacket's going for on auction?

FIND OUT, AFTER THE JUMP…

Ryan just signed the jacket for an auction. The proceeds go to the Screen Actors Guild Foundation which promotes childhood literacy, scholarships for performers and emergency funds for guild members with catastrophic illness.

The already iconic scorpion is far outpacing the rest of the auction items. A lunch date with Eric Stonestreet ("Cam" on Modern Family) is the only thing near it. The current asking price is with around $1,925 after 54 bids. There's 2 days left so if you're a Gosling fanatic with deep pockets have at it.

This is the closest you'll come to getting under his clothes. 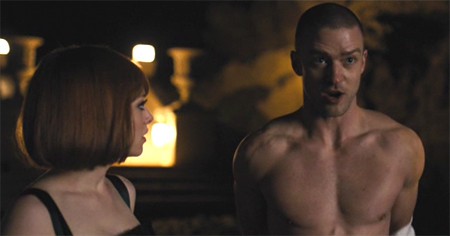 Justin Timberlake goes skinny dipping with Amanda Seyfried in IN TIME but sadly that's not half as sexy as it sounds.