With an eye on the 2014 Winter Olympics in Sochi, Johnny Weir announced he would be returning to competitive skating, yesterday, ESPN reports: 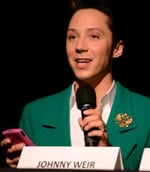 "I wanted to do this while I still have the time," the three-time U.S. champion said at a news conference in Manhattan. "I didn't want to be 50 years old and look back and say, 'Oh, those last two years before Sochi and I kind of let them go doing other things."

Weir said he will give up drinking and attending movie premieres for serious practice, mostly at a rink in Hackensack, NJ:

He plans to work hard on his quad, the all-important element in men's skating these days. Not only are all the top men doing quads, but world champion Patrick Chan has two in his free skate.

Weir has tried them in competition but struggled to land them cleanly.

"So I can actually be a real threat and not show up as just kind of a face of figure skating," Weir said of perfecting the four-revolution jump. "I want to show up and be competitive and actually have people take this seriously. This isn't a publicity stunt."