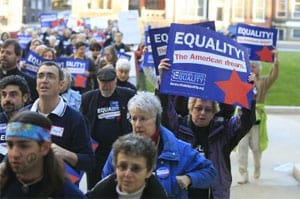 In a dramatic move, Democratic leaders plan to announce at a news conference Monday that a bill legalizing gay marriage will be the first measure introduced in the new session of the Senate and the Assembly, sources with knowledge of their intentions said last night.

A unified Democratic leadership represents the best chance supporters will have to see a bill legalizing gay marriage move through both houses, according to three sources who requested anonymity because they are not authorized to speak publicly about the plan.

Although the legislation has the backing of Democratic Assembly Speaker Sheila Oliver and "pivotal" supporter State Sen. President Stephen Sweeney, it remains to be seen whether Christie would sign such a bill. In the past he has said he opposes marriage equality. If Christie does veto, "it is unlikely that they can muster a two-thirds vote to override," the paper adds.