The secretary-general of the Iranian High Council for Human Rights offered no indication to a German lawmaker last week that warnings connecting diplomacy, aide, and human rights would have any effect on the death sentence faced by gays in Iran, Radio Free Europe reports: 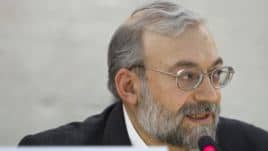 "The West says that the marriage of homosexuals should be allowed under the human rights charter, however, we think it is sexual immorality and a disease," Iran’s semiofficial Fars news agency quoted Mohammad Javad Larijani as saying, according to dpa.

Fars reported that Larijani made his remarks during a meeting in Tehran with German lawmaker Tom Koenigs, who chairs the human rights committee in Germany’s parliament.