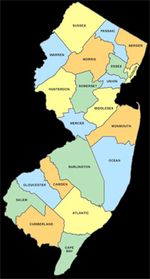 New Jersey voters support 52 – 42 percent allowing same-sex couples to marry, the first time support tops 50 percent. There is a strong divide between those who attend religious services weekly and those who attend less frequently, according to a Quinnipiac University poll released today.

The previous high for same-sex marriage was 49 – 43 percent in an April 23, 2009 survey by the independent Quinnipiac (KWIN-uh-pe-ack) University.

Earlier this month, New Jersey lawmakers introduced and fast-tracked a marriage equality bill in the state. The National Organization for Marriage has pledged $500,000 to fight lawmakers who support it and assist those who don't.

Governor Chris Christie, who has said he would veto such a bill in the past, now won't say what he'll do if such a bill reaches his desk.