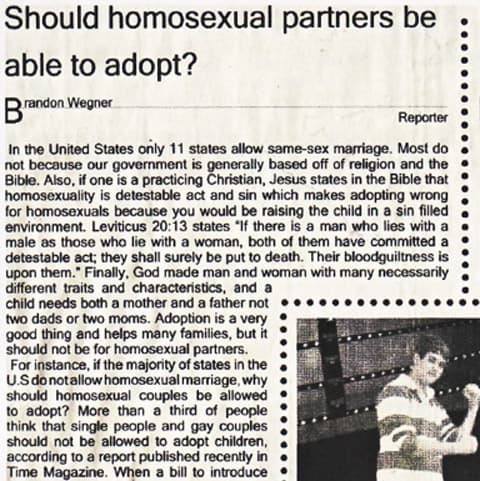 Over the weekend, Brandon posted about a high school student newspaper controversy in Wisconsin. The newspaper had published a point – counterpoint opinion piece (you can read it HERE) on gay adoption that had offended the gay parents of a student at the school because the article arguing against gay adoption, written by a student named Brandon Wegner, cited lines from Leviticus which call for gays to be put to death. 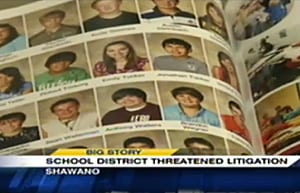 "He did nothing more than to express his opinion on a particular topic, an opinion in which with some are free to agree and some to disagree but an opinion which is absolutely protected with the first amendment of the Constitution" Mihet said.

Watch WSAW's report, AFTER THE JUMP…

Liberty Counsel is demanding the school district apologize and tell students that they have a first amendment right to express their opinions. Liberty Counsel says it will sue if they don't comply.

Other conservatives are chiming in. Rod Dreher at The American Conservative is outraged:

Unbelievable. Granted, Wegner’s editorial is a thoroughly lame piece of rhetoric, but remember, he was asked by a teacher to take the opposing side of a controversial public issue. For this, the kid gets punished? And not only punished, but his exercise of free speech in a school paper op-ed is “bullying”?!

I hope he sues the knotted knickers off that superintendent and the school district. This is blatantly unconstitutional. Legality aside, the idea that the formal expression of an opinion that annoys a favored class is a form of violent harassment is offensive and dangerous.

Watch WSAW's report, AFTER THE JUMP…

Video may take a few seconds to load.