Upon your daily Internet search for pretty much anything, you may hit something like Google's modified blackout or Reddit's dark home screen that urge you to sign a petition because "SOPA and PIPA damage the Internet." A link on Google's home page will also urge you to sign the petition and tell you that the bills "would censor the Web and impose harmful regulations on American business." 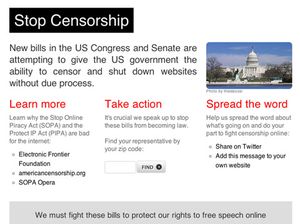 Towleroad has not gone dark, but, as Andy mentioned, you will see an interstitial that directs you to information on SOPA and PIPA, finds your Congressional representatives for you to reach out to, and allows you to share your displeasure on Twitter and Facebook.

Today is a day of protest, but a protest written in code, to bring attention to what many Internet companies see as two dangerous proposals in Congress: the Stop Online Piracy Act (SOPA) and the Protect IP Act (PIPA). And, while there is an abundance of information and opinions out there about what these bills may do, we felt that Towleroad readers deserve an honest dissection of the issues.

First, we have to be honest about the problem. Infringement of American copyrights not only affects those of us who create, but it affects all of us who enjoy the creations of others. Creators and innovators have been battling theft and copying of their works forever, but a medium as pervasive and cheap as the Internet poses unique problems that, some argue, traditional anti-piracy efforts cannot solve. How can you go after an infringer when he's anonymous, hidden behind an IP address or just really far away? How do punish websites whose sole purpose is to enable infringement when those websites can pop up anywhere, from Baltimore to Kuala Lumpur?

Congress's answer — more accurately, the movie and music industries' lobbyists' answer — is the SOPA-PIPA tandem. Ostensibly, these laws protect American copyright interests from foreign infringers and foreign websites that foster infringement. (For the purposes of this post, let's put to one side the differences between the two bills and focus on what they would do together if passed.) The bills do this by enhancing penalties and making it easier for the Department of Justice to shut down websites deemed a threat to American copyrights.

Let us assume the problem is real. The questions we have to ask ourselves are the following:

1. Is the current problem a problem of lax or inadequate enforcement? The Internet community says, No. Silicon Valley and its allies online would say that online copyright protection can work if copyright owners would simply innovate to accommodate the new technology, rather than try to fit square pegs into round holes. Technology no longer allows us to look an infringer in the face and see the fruits of his theft or copying with any permanency, and if technology allows for greater democracy in the sharing of music and television and other creations, owners of those copyrights should change with the times, offering content in a simple, user-friendly way that would obviate the need for infringement. Of course, the television, music, and movie industries — which employ or help to employ millions of us — would say that rogue websites are allowing individuals to escape their responsibility to pay for others' content and providing content at no cost is the only thing that would make infringers happy. Unfortunately, they say, it would bankrupt the industries.

2. Even assuming this is an enforcement problem, is increasing penalties and making it easier to identify infringing websites the way to solve the problem? Again, no, and this is where the devil is in the details of SOPA and PIPA. These bills offer wide discretion to law enforcement and grant extraordinary power to big movie, television, and music companies to identify websites they feel are threats to their copyrights. It is hard to argue the other side, even for a lawyer. SOPA and PIPA are so poorly written and so-one sided that, at a minimum, they need to be amended, but more likely, should be scrapped in favor of new bills, with precise words, clear goals, and balance — an approach that Silicon Valley and Hollywood can rally behind.

Since the first issue is unresolvable in a post of this scope, I would like to focus on the dangerous enforcement mechanism of the proposed legislation. This alone is reason enough to support the anti-SOPA/PIPA petition and to call your representatives.

Here is a brief summary of how SOPA/PIPA would work:

We begin with entertainment companies like Disney, Viacom, EMI, or Bertelsmann having a good faith belief that Johnny Jughead is infringing their copyrights on his website, ilovecopyright.com. They can either come to this belief on their own, i.e., from their own regular scouring of the Internet for possible violations, or if a third party, i.e., you or I, send them a letter informing on Johnny.

Let's say Johnny likes to retransmit Yankee games without the express written consent of Major League Baseball and the New York Yankees, or he uses his own recording software to tape episodes of The Daily Show and posts them online. Given this good faith belief and some evidence of infringement, these companies can go to court or seek the help of the Department of Justice to get court orders issued to any payment processors or advertisers doing business with Johnny's website. Issuance of these court orders can be done ex parte, or, without Johnny or his lawyer present. The only way to rebut the presumption of infringement is to submit to US jurisdiction (a big deal for a foreign website!) and to offer evidence as to why you are not infringing. But, as discussed below, if Johnny uploads content or allows his users to upload content, it will be hard to prove he's outside SOPA's reach.

Similar injunctions are also sent to search engines, barring them from displaying his website in their lists of search results. So, given how often we come upon new websites through search engines, this injunction would effectively cut off most of Johnny's traffic. Then, court orders would be sent to Johnny's domain registrar forcing them to stop providing Johnny service, lest they be sued themselves.

All this doesn't sound too bad, assuming you recognize the problem of rogue websites maliciously infringing US copyrights. The image we might have in our head is a website from China, constantly stealing our movies, our songs, and other art, to sell or distribute on the cheap.

Proponents say SOPA and PIPA are about capturing foreign infringers. If that was honestly the purpose, the drafting was either sloppy or a bad faith attempt on the part of copyright owners to hide a grossly unbalanced law behind a veil. The words are broad and undefined, too much power is given to copyright owners and large corporations that have the time and money to traffic the Internet or pay their lawyers to, and the mechanisms of control — choking up websites by attacking ad sites, payment sites, and service providers — turns intellectual property law into an octopus with hands in every pot in every corner of the web.

None of this suggests that the answer to the problem is to do nothing. If you believe copyright infringement is a problem — many of us do! — then we need to go back to square one to craft a bill that precisely captures foreign infringers without suffocating the Internet. There are a few ways to do this:

1. Differentiate between websites whose sole or overwhelming purpose is to facilitate infringement and those that only incidentally have a mechanism for infringement to occur. The former are bad actors, the latter is pretty much the rest of the Internet.

2. Encourage online service and content providers to be more vigilant about what goes on in their world. Willful blindness to ongoing infringement is morally equivalent to infringing yourself.

3. Create an online and copyright environment where infringement is unnecessary. Copyright owners need to innovate and provide content cheaply and easily. This, above all, will reduce infringement, as Apple's iTunes has shown. Internet companies need to foster social norms of responsibility and community, rather than adopt an attitude that the Internet is a bastion of unbridled freedom and lawlessness. That attitude not only contributes to rampant infringement under the guise of free speech, but fosters an online world where hate and harassment is ok. The Internet is not above the law any more than the law is there for the sole purpose of protecting EMI's and Viacom's business model. We're in this together, so let's write a new law together.