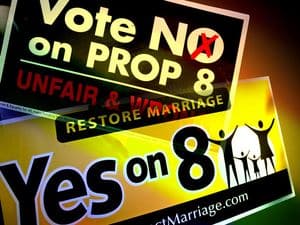 Developing…refresh this page for updates…

READ THE DECISION, AFTER THE JUMP…

"We consider whether that amendment violates the Fourteenth Amendment to the United States Constitution. We conclude that it does."

"Proposition 8 served no purpose,a nd has no effect, other than to lessen the status & human dignity of gays and lesbians in California, and to officially reclassify their relationships and families as inferior to those of opposite-sex couples."

A stay on the decision remains in place, as many expected, so same-sex marriages will not immediately resume.

The 2-1 decision by a panel of the U.S. 9th Circuit Court of Appeals found that Proposition 8, the 2008 ballot measure that limited marriage to one man and one woman, violated the U.S. Constitution. The architects of Prop. 8 have vowed to appeal.

The ruling was narrow and likely to be limited to California.

The ruling upheld a decision by retired Chief U.S. District Judge Vaughn R. Walker, who struck down the ballot measure in 2010 after holding an unprecedented trial on the nature of sexual orientation and the history of marriage.

In a separate decision,  the appeals court refused to invalidate Walker’s ruling on the grounds that he should have disclosed he was in a long term same-sex relationship.  Walker, a Republican appointee who is openly gay, said after his ruling  that he had been in a relationship with another man for 10 years. He has never said whether he and partner wished to marry.

Ari Ezra Waldman will have his analysis up as soon as possible, once he gets a chance to look carefully at the opinion. If you missed it, here's his briefing on what to expect, and what he'll address in the analysis.

Tune in HERE for the press conference by AFER attorneys and plaintiffs beginning in a few minutes at 10:30am PST.