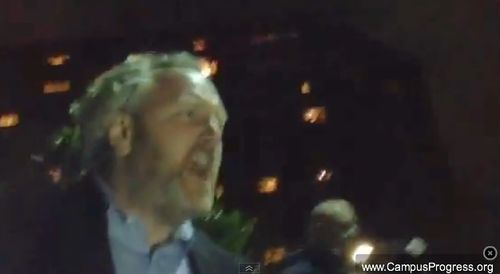 CPAC's all over. Sarah Palin closed it out with some standard-issue Obama bashing, which was interrupted only briefly by some Occupy folk trying to mic check. The convention spawned many hilarious and/or instructive videos, provided a lot of food for thought, and gave many of the country's most unrepentant homophobes a few blissful days in which they didn't have to feel like an unhip and disliked minority. For my money, the best moment of CPAC arrived Thursday night, out of doors, when Andrew Breitbart paid a visit to the Occupiers camped out by the CPAC Marriott.

Andrew Breitbart is America's most fascinating right-wing nutbag because he doesn't gussy up. He is a proud and practicing nutbag in thought, word, and deed. Some of his colleagues put on suits, trot out charts and make a show of reasonableness. Not Breitbart. He looks like a mad Russian revolutionary from the turn of the last century and lives like a has-been Irish poet in the depths of a wrathful bender. He is a part-time ally of the gays — he was on the board of GOProud — but he's otherwise an exemplar of everything weird and wrong and bloodthirsty at the political extremities of modern America. He and his friend James O'Keefe openly, willfully lie about and misrepresent un-famous, ordinary people who happen to possess differing political views — ACORN employees; NPR executives; Shirley Sherrod — just for the fun of it, just to hurt them, just because they're on the Other Side. There's no logic to it. Just inchoate anger, right there in the open. And it was never more in the open than Thursday at CPAC.

Watch, AFTER THE JUMP, as the rich and powerful Mr. Breitbart tells a bunch of American kids exactly what he thinks of them.