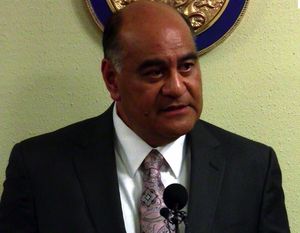 On a Friday in February three years ago, disappointed LGBT people and their allies departed the Idaho Senate, some tearfully, after the Senate State Affairs Committee rejected legislation adding LGBTs to the Idaho Human Rights Act, which would have protected LGBTs from housing and employment discrimination. A similar scene played out yesterday. From MagicValley.com:

BOISE • Shock, anger and sadness reverberated through the Idaho Senate auditorium Friday morning after a party-line vote by the Senate State Affairs Committee killed legislation to add protections for gay, lesbian and transgendered individuals under the Idaho Human Rights Act.

Legislative committees don't hear testimony at print hearings, but that didn't stop 300 people from watching as the proposal fell, with only the committee’s two Democrats voting to print the bill. Many attendees wore buttons or shirts stating their support for the legislation, referred to as "Add The Words."

… Bill sponsor Sen. Edgar Malepeai, D-Pocatello, introduced the legislation to the committee. He fought back tears [as he] asked its members to print the bill and allow testimony from supporters.

"In my opinion, it would be profoundly disrespectful not to afford," Malepeai said, pausing to compose himself. "Not to afford those tens of thousands of families affected by this legislation with at least a printing of the bill."

None of the committee members spoke against the bill, though Sen. Chuck Winder, R-Boise, thanked Malepeai for his work.

Respect or no, Winder didn't want that bill printed. Though he and his fellow Republicans declined to speak publically against the bill, they all voted against its printing. From MagicValley.com:

After the vote, the audience gasped. One man shouted "Have you no shame?" as Committee Chairman Curt McKenzie, R-Nampa, adjourned the committee.
As Sen. Bart Davis, R-Idaho Falls, left the auditorium, Bliss resident Marley Luna tearfully approached him, asking for an explanation of his vote. He silently walked past her.

Last time the bill was rejected, it at least made it to print. For more info on the efforts to amend Idaho law, visit addthewords.org.

Previous Post: « Bruce Springsteen’s ‘We Take Care Of Our Own’: VIDEO
Next Post: Sen. Steve Sweeney Predicts Marriage Will Pass NJ Legislature And Get Vetoed By Chris Christie »