As I mentioned earlier today, tomorrow's decision regarding the constitutionality of Proposition 8 is coming tomorrow before 10 am PST. We'll have the ruling followed by analysis from Ari Ezra Waldman here on Towleroad. 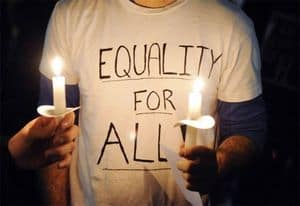 The American Foundation for Equal Rights is holding a press conference at 10:30 am in L.A. which we'll try to have for you live here.

Here's some information on rallies being held around tomorrow's Prop 8 decision.

Gather on the steps of the Ninth Circuit Federal Courthouse, 95 7th Street (at Mission), San Francisco, CA 94103-1518 to receive the ruling (anticipated at 10:00 AM). Afterwards, we will proceed to San Francisco City Hall, where clergy will be available to bless couples who are not able to marry because of Prop. 8. (Even if the Ninth Circuit rules in our favor, it is highly likely that there will be a stay on the decision, meaning no marriages could take place immediately.)

Gather at Jane Warner Plaza, on 17th street across from the MUNI station on Castro and Market, San Francisco, CA 94114 for a community rally. We will either celebrate or protest the decision, and either way, rededicate our resolve to achieve full federal equality nationwide.

Then we will march down Santa Monica Blvd to demand full equality now!