This past weekend at its New York gala, the Human Rights Campaign honored Goldman Sachs with the 2011 Workplace Equality Innovation Award. Accompanying that honor was a video released by HRC's 'Americans for Marriage Equality' campaign featuring Goldman CEO Lloyd Blankfein (above) and an article in the New York Times:

Fred Sainz, an executive with the Human Rights Campaign, said the organization sought Mr. Blankfein, in part, because he is “an unexpected messenger.”

“Lloyd Blankfein is not someone average Americans would think is going to support marriage equality,” Mr. Sainz said. “The green visor crowd is not typically associated with socially progressive policies, and this is further proof that a diversity of Americans are coming to the same conclusion.”

The LGBT grassroots did not respond kindly to HRC's move. 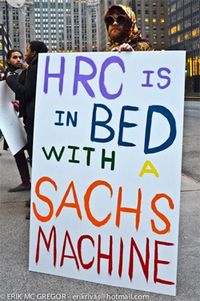 The honor to Goldman was met by a protest from approximately 80 members of Queer Occupy Wall Street, which countered the $650-a-plate dinner with an "Occupy Guerilla Potluck for Full Equality" outside the doors of the Waldorf Astoria where the event was taking place.

The Queer Caucus listed three demands regarding its protest:

The Queer Caucus: 1. Condemns HRC for honoring Goldman Sachs, 2. Calls upon HRC to adopt a strategy of Full Equality by 2014, and 3. Demands that HRC create a transparent process that includes the grassroots.

The NYPD broke up the protest, Joe Jervis reports:

Cops moved the protesters across the street to a location where the black-tie crowd could not hear their chants. Still some protesters entered the Waldorf lobby to make their case. Some gala attendees reportedly mocked the protest via Twitter.

And today, Marketing and communications consultant Andrew Beaver slammed HRC in the Huffington Post. Beaver said giving such an honor to "a predatory company like Goldman Sachs" shows that HRC "has seriously lost its way at a unique time in our country and the LGBT movement's history."

HRC's willingness to whitewash the pasts of individuals and organizations in return for cold cash is nothing new. In some ways I don't fault the group's willingness to look these execs in the eye, take their money, and use it to promote LGBT equality. But this strategy has its limits. In honoring Goldman Sachs, HRC is incredibly tone-deaf to the enormous outrage nearly all Americans feel toward the banks and securities firms at the center of the economic meltdown…

…I'm not suggesting it is HRC's job to police the American economy, nor do I think an organization that represents the spectrum of LGBT opinion should become a mouthpiece for critiques of our economic system, but I do believe HRC should embrace fundamental progressive values, especially those that so directly impact a generation we encouraged to live by those values. In honoring Goldman Sachs, HRC is aligning itself with a company that has nearly bankrupted an entire future generation and would do it again. This past Saturday HRC sent the message of "do as I say, not as I do," and that is very sad.

What are your thoughts about the HRC-Goldman Sachs relationship?