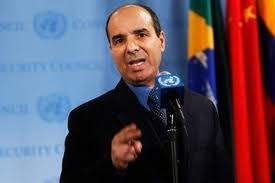 Protesting the council’s first panel discussion on discrimination and violence based on sexual orientation, scheduled for March 7th, Libya’s representative told the gathering of ambassadors today that LGBT topics “affect religion and the continuation and reproduction of the human race.” He added that, were it not for their suspension, Libya would have opposed the council’s June 2011 resolution on the topic.

Said Hillel Neuer, executive director of human rights group UN Watch:“We were happy to see the Gaddafi regime finally suspended last year. Yet today’s shocking homophobic outburst by the new Libyan government, together with the routine abuse of prisoners, underscores the serious questions we have about whether the new regime is genuinely committed to improving on the dark record of its predecessor, or to pandering to some of the hardline Islamists amidst its ranks."

Neuer added, "The restoration of the new Libyan regime to the council, supported by 123 states including all of the Western democracies, was carried out precipitously and without any record of its commitment to human rights domestically and abroad. The new rulers’ pledges are being broken. Gays are now paying the price, with their right to be free from violent attacks now being undermined at the UN by a country that democratic countries fought to liberate, and by a goverment that our leaders helped install. It’s all very disconcerting.”