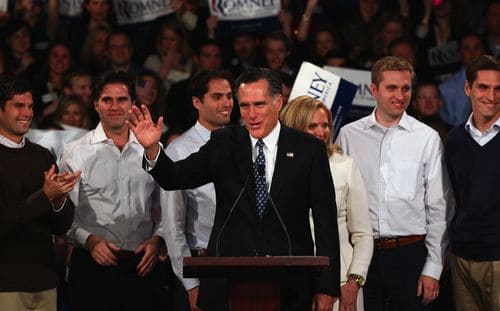 With 10% of the results in, Romney had about 48% of the vote while Rep. Ron Paul and former House Speaker Newt Gingrich were in a tight race for second with 21% and 20% of the vote, respectively. Former Pennsylvania Sen. Rick Santorum, who had largely bypassed the state, had 11% of the vote. Those numbers were gathered from vote counters at caucus sites across the state.

With a win in Nevada, Romney will be the first GOP candidate in this cycle to score back-to-back wins. The former Massachusetts governor appeared to win in the Iowa caucuses but the contest was later awarded to Santorum when the vote was certified. Romney scored a big win in New Hampshire but was then stunned in South Carolina by Gingrich. Romney scored a 14-point victory over Gingrich and the rest of the field in Tuesday's Florida primary and entered Saturday's contest with a sizable lead in polls.

No surprises here. Momentum or no, Nevada's pretty Mornon.

The big news from tonight's primary, if any news from tonight's primary can be ascribed qualities of bigness, is how utterly defeated looked the massively homophobic Rick Santorum as he delivered his concession speech. He took off and signed his tie right at the beginning of his address — it's to be auctioned off later by some improbable groupie — and rambled on, looking sad and rumpled, for a good fifteen minutes about imperiled American freedoms and imperiled American values and the cruel vagaries of money politics before Wolf Blitzer cut him off.

Mitt Romney, Newt Gingrich, and Ron Paul have yet to speak. (Gingrich says he's foregoing the usual concession speech and intends to do an honest-to-goodness press conference.) If anybody says anything interesting, I'll post the speeches tomorrow.