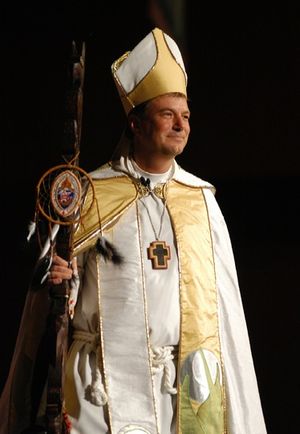 As the Washington State Senate voted in favor of marriage equality on Wednesday, it had the vocal support of a senior member of the Episcopal clergy.

Earlier this week, the Rt. Rev. Greg Rickel, VIII Bishop of Olympia, posted the following to his blog:

It is expected that our Washington state legislators will very soon, perhaps even tomorrow begin floor deliberations on HB2516 & SB6239 with the Senate to begin.  Passage of these bills or a version of them would make same sex marriage law in our state.   Our Episcopal Church, after a long discussion about this over the years is poised to do roughly the same this summer at our General Convention.

While I am careful about wading into our legislator’s business, I would say this is the church’s business too.  I have a asked by many about my feelings on it, and I have decided to share them.  The ideas are not new,  I have shared them openly in the walk-abouts before becoming your bishop and in many venues before and since.

Christianity has held, when considering relationships of all sorts, but especially in relation to two people in marriage, fidelity to be our value.   Fidelity is the value in most all our sacraments and also in our life as Christians.

It seems to me we have held our gay and lesbian brothers and sisters in a “catch-22″.  We say they cannot live up to our value because they cannot be married, or even blessed in their union.  While many of them have begged for this, it is still not possible.    What they ask of us, the church and the government, is to put boundaries around their relationship, to hold them in the same regard and with the same respect, which would also mean that we expect the same from them.  They are not asking for special treatment.  They are asking for equal treatment.   They are asking to be accountable, as a couple, in community.  To me, this is a conservative proposal.  I am for it, and I hope we will finally make way for this to happen, not only in our society, but also in our church.

As SeattlePi points out, allowing gay clergy to serve and straight clergy give voice to such opinions has cost the Episcopals buildings, lands, membership and money in the last decade. And it's still costing them — one irate commentator on the Bishop's blog promises to ditch the church if marriage equality is enshrined in Washington law, as now looks likely.

As Andy reported, many Washington clerics are already plotting to reverse equality, should equality come. It's good to know the Rt. Rev.'s around to balance the scale.