Even though Tuesday’s Ninth Circuit decision in Perry v. Brown was narrowly focused on the unique situation that precipitated Prop 8 in California, it could have broad implications. Today, I would like to expand on this point and theorize why the panel decided the way it did. I anticipate that this will answer some of the questions posted to yesterday’s post; I hope to answer all questions in subsequent columns. 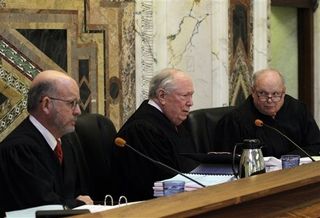 As you recall, the Ninth Circuit affirmed Judge Vaughn Walker’s district court ruling that Prop 8 is unconstitutional. While Judge Walker decided that same-sex marriage bans violate due process (by denying gay people the fundamental right to marry) and violate equal protection (by treating gay people differently than straight people for no legitimate reason), the Ninth Circuit affirmed on narrower grounds – namely, Prop 8 violated equal protection because it took away a right to marry for no other reason but to harm and discriminate against gay people. The case quoted liberally from Romer v. Evans, another (albeit broader) case where rights were taken away from gays simply because Colorado wanted to discriminate against a class of persons it didn’t like.

We are left wondering the following: Why use this narrow ground? What does the narrow affirmance mean for the likelihood that the Supreme Court will take the case? Does the narrowness of the opinion make a Supreme Court affirmance more or less likely, assuming the high court grants review? How could this case impact other states considering gay marriage bans or marriage equality legislation? If it is California-specific, how could this case impact other gay rights cases?

A few answers to these questions, AFTER THE JUMP…

There is one legal and at least three strategic reasons for a narrow holding.

When a federal court can decide a case without reaching broader constitutional issues, it must do so. This tradition is a product of the Constitution’s Case and Controversy Clause, which requires federal courts to only decide active cases before them, and Supreme Court precedent. Not every issue a constitutional issue; the document’s survival as lasting governing law depends on stability. When narrower grounds allow the entire case to be put to rest – whether those narrower grounds are statutes or more focused constitutional law – the court has no reason to reach broader issues.

That long-standing tradition is likely a justification for the court’s strategic decision, but the panel majority could be pursuing different strategies. Some experts are already treating yesterday’s decision as strategically similar to Judge Walker’s original decision, both of which quote liberally from and rely heavily on opinions written by Justice Anthony Kennedy, the supposed swing vote on the high court. Judge Reinhardt’s opinion relied squarely on Romer; Judge Walker quoted Romer, Lawrence, and other Kennedy decisions.

But, this theory proves too little. Judge Reinhardt could have nodded to Justice Kennedy through the broad due process and equal protection holdings he specifically declined to address because, as Judge Walker noted, those holdings require liberal reliance on Romer and Lawrence.

Perhaps the Ninth Circuit is anticipating the three possible reactions from the Supreme Court. The narrow holding makes it easier for the Supreme Court to take the case and summarily affirm, or simply deny review. Under this theory, the laser-like focus on California gives the high court little opportunity to find fault: the official interpretation of Prop 8’s effect is a state law matter, so it cannot quibble with Judge Reinhardt’s argument that taking away only the word “marriage” while leaving state policies that see gay people as great parents and capable of stable, loving, and productive relationships; the narrow decision has few direct implications on other states and other cases. A summary affirmance or denial would be a victory: marriage equality could return to California!

But, this theory assumes too much. If there are no issues to discuss, why grant and summarily affirm? Maybe that’s what Judge Reinhardt wants. Though Judge Smith’s dissent, which quarreled with the majority’s interpretation and use of rational basis review, gives the Court the chance to grant review to clarify the standard for discrimination on the basis of sexual orientation, the narrow decision was not necessary to do that. What’s more, the Court would not take an incomplete case just to determine a standard of review that it has left unclear for years. 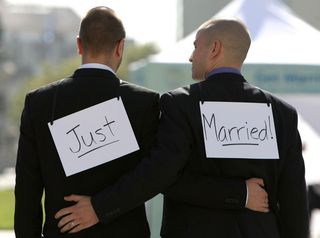 It seems more likely that the Ninth Circuit is playing for time in one of two ways. Perhaps the Ninth Circuit sees both a conservative Supreme Court and gay marriage as an ongoing hot political controversy. In that context, the argument goes, neither the country nor the Supreme Court are ready to see a fundamental right to marry for gay persons and are as yet unwilling to say there is no reason to deny the word “marriage” to gay couples. The narrow holding specific to California is a stop-gap measure meant to provide a gay marriage victory without the political and sociological disruption caused by, say, Roe v. Wade.

There is merit to that, and not only if you prefer slow, moderate progress to rapid change that risks a backlash. Federal courts cannot withstand endless institutional and popular backlash. They have neither the power of the purse nor an army to enforce their judgments, and when they fall into disrepute, they risk being nullified or turned into pawns of the political process. Both sides of the aisle do this in reaction to perceived judicial overreach: Nixon built entire campaigns railing against the Warren Court’s criminal procedure jurisprudence, and President Obama and the Democratic Party are hitting the Roberts Court over Citizens United.

Yet, that fear of going too far infantilizes our courts and judges and ignores the bold importance of Brown v. Board of Education, Mapp v. Ohio, Gideon v. Wainwright, and other precedent-setting decisions. More importantly, though, in order for this strategy to work, we need another case to wind through the courts from beginning to end. A denial of certiorari in this case would pretty much end the Perry saga, Judge Walker’s decision would be affirmed, and his order requiring California to issue marriage licenses would go into effect in short order. The narrow Ninth Circuit holding means that while the case would have declared a denial of same-sex marriage rights unconstitutional – something unheard of just 10 years ago – it will likely have little effect on all the other states with marriage bans that did not go through the same back and forth that characterized California’s marriage equality story. So, we would need a new case, on facts with broader applicability.

That is, unless the Supreme Court takes the case and reverses. The Court could come up with any number of reasons, ranging from the standard of review (unlikely), standing (less likely), to a flat rejection of Judge Reinhardt’s narrow holding. A reversal would send the case back to the Ninth Circuit, at which point the same panel would assess the Supreme Court’s instructions and, depending upon the ground for reversal above, issue the broader decision following Judge Walker. That would take time, and that’s exactly the point. From the time Prop 8 passed in 2008, the number of Americans living in states with marriage equality has more than doubled; Washington state, Maryland, Maine, and now, perhaps, Illinois are either considering marriage recognition bills or are on the cusp of welcoming gays into the marriage fold. Time is what we may need for larger majorities to favor same-sex marriage, for more states to extend marriage rights, for more people to get married, for DOMA to be declared unconstitutional or repealed, and for more of our straight friends and neighbors to see that gay marriage is a good thing. A later decision could come in a context similar to the political background of Lawrence and Loving, where most states had already discarded or stopped enforcing their anti-sodomy and anti-miscegenation laws, respectively. This wraps the Ninth Circuit and the Supreme Court within a blanket of institutional and popular support.

All this has us wondering if the Ninth Circuit’s decision was as narrow as the chattering classes are suggesting. It is narrow in the sense that there were broader possible holdings that could have immediately affected the constitutionality of marriage bans in other states (the decision’s limited applicability outside California does mean that marriage bans in other states or territories in the Ninth Circuit, for example – from Alaska to Hawaii, and from Guam to Idaho – should remain untouched); it is broad in that Perry is still precedent for the inherent equality of gay persons when it comes to marriage. No federal appellate court has ever said something like that. Just like Major Witt’s “Don’t Ask, Don’t Tell” case helped created precedent to support Edith Windsor’s challenge to the inaptly named Defense of Marriage Act, so too will Perry create helpful precedent.

Stay tuned to Towleroad for my next post answering more questions about Perry. Thanks for your patience.