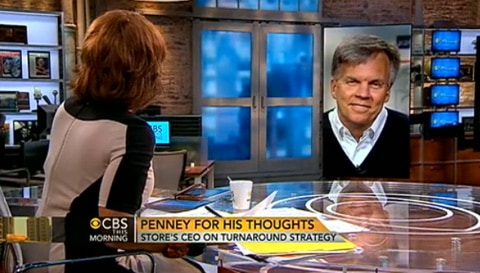 JC Penney CEO Ron Johnson spoke out to Gayle King about the One Million Moms controversy and Ellen DeGeneres on CBS This Morning.

"We don't look at it like a controversy. One of the great things about America is people can speak their mind. And you know, the organization that believes one thing has spoken and it was great to see Ellen share her views yesterday. And we stand squarely behind Ellen as our spokesperson and that's a great thing. Because she shares the same values that we do in our company. Our company was founded 110 years ago on the golden rule, which is about treating people fair and square, just like you would like to be treated yourself. And we think Ellen represents the values of our company and the values that we share."

Johnson, who is the genius behind Apple's retail stores, recently joined JC Penney in an effort to revive its brand.

If you missed Ellen's show statement ripping One Million Moms for calling for her to be fired, check it out HERE.