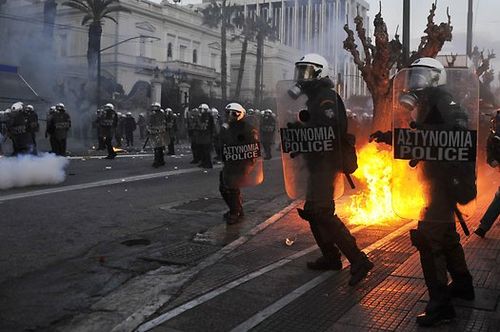 State television reported the violence spread to the tourist islands of Corfu and Crete, the northern city of Thessaloniki and towns in central Greece. Shops were looted in the capital where police said 34 buildings were ablaze.

Prime Minister Lucas Papademos denounced the worst breakdown of order since 2008 when violence gripped Greece for weeks after police shot a 15-year-old schoolboy.

"Vandalism, violence and destruction have no place in a democratic country and won't be tolerated," he told parliament as it prepared to vote on the new 130 billion euro bailout to save Greece from a chaotic bankruptcy.

The bishops’ decision to rebuff the compromise means that “religious freedom” will continue to be a rallying cry for some Catholics who have heard it preached from the pulpit for the last three weeks, for evangelical Christians on the religious right, for Republican candidates on the campaign trail and for members of Congress who are supporting a legislative fix on Capitol Hill.

… Mr. Obama said that the compromise would take the Catholic institutions out of the equation by relieving them from either paying for coverage for contraceptives or providing any referral to their employees for the coverage. Instead, insurance companies would be required to pay for the contraceptives, and to arrange it. The insurers will agree, the White House said, because it is more expensive for them to pay for pregnancies than to pay for contraceptives.

Churches and houses of worship that object to birth control coverage are already exempted. The compromise applies to primarily Catholic institutions, such as hospitals, universities and charities, that employ and serve large numbers of non-Catholics.

The bishops said the plan offered insufficient protection for their institutions: “In the case where the employee and insurer agree to add the objectionable coverage, that coverage is still provided as a part of the objecting employer’s plan, financed in the same way as the rest of the coverage offered by the objecting employer. This, too, raises serious moral concerns.”

A history of terrestrial nuclear explosions, in time lapse — a video both frightening and lyrical.

Dose a male snake with estrogen, and other male snakes go wild.

During the 2004 campaign, Republican strategists put gay marriage on referendum ballots in key swing states as a "wedge" issue to unnerve Democrats and gin up the conservative base for President George W. Bush. The Massachusetts high court had just ruled for legalization, and hostility toward the concept was the centrist position in America.

This is no longer true.

Granted, social conservatives voiced anger Tuesday when, for the first time, a federal court of appeals declared that gay marriage was a constitutional expression of equal rights. But most Americans will shrug and move on. As evidenced by all the polls, tolerance is the new centrism.

… That has left the newspaper and the company’s other businesses exposed. The newsroom, once with more than 1,000 employees, now stands at less than 640 people, depleted by buyouts and staff defections. The newspaper’s Style section, once one of the most coveted assignments in American journalism, has shrunk from nearly 100 people to a quarter of that size. Bureaus in New York, Los Angeles and Chicago are gone. There were so many Friday afternoon cake-cutting send-offs for departing employees last summer that editors had to coordinate them so they didn’t overlap. 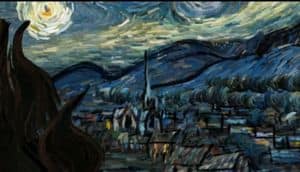 Van Gogh's Starry Night, as you've never seen it before.