Two Colombian Roman Catholic priests were murdered in Bogota last year, and investigators have now discovered it was they who planned and carried out their deaths by hiring hitmen to do it, Bikya Masar reports: 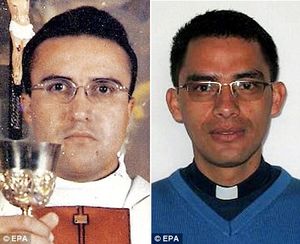 The Bogota daily El Tiempo reported that the priests hired the killers for about 8,400 dollars.

Public prosecutor Patricia Larrota said Tuesday that the priests, who were apparently romantically involved with each other, had decided to commit suicide because one of them had been diagnosed with syphilis and HIV.

They went to Chicamocha Canyon in northeastern Colombia with the intention to jump to their deaths, but they could not do it: due to a large number of suicides at the site, officials in Santander province had put up barriers.

“Since there were retaining rails, they could not (jump), so the only option they found then was to find a person who ended their lives,” Larrota said.

The priests, Rafael Reatiga and Richard Piffano, were found dead inside a car on January 27, 2011. The authorities first suspected a robbery, since the two men had drawn a large amount of money from the bank a day earlier, when they went missing, and the cash was never found. But the hypothesis lost credibility once the two priests, both aged 30, were found to have settled private matters and cancelled all their appointments after January 26. One of them cancelled christenings he was supposed to officiate, while the other registered all his property in his mother’s name.

Investigators tracked down calls made by the two priests in the hours before they were shot. They came to a gang of hitmen and arrested two of its members, who were formally charged with the crimes Tuesday.

The family has rejected the notion that the priests could have been gay and are demanding their bodies be exhumed to prove it was a robbery-related murder.

Watch a Colombian news report from the day their bodies were discovered,
AFTER THE JUMP…