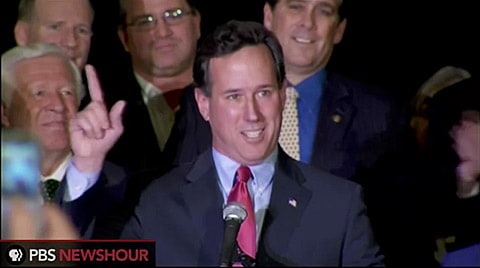 Rick Santorum made last night a very bad night for Mitt Romney in the race to be the GOP's presidential nominee, as Santorum took Missouri, Minnesota, and, unexpectedly, Colorado.

The results on Tuesday shook the political world, which appeared to once again make the mistake of believing the Republican race for the presidency was finally set on a stable trajectory. But it was an open question whether the defeats were a momentary embarrassment or a prolonged setback for Mr. Romney.

His disappointing night notwithstanding, Mr. Romney goes into the next round of primaries and caucuses much better financed than his opponents in what will be much more of a nationwide campaign, capped off by the 11 Super Tuesday competitions on March 6. But the enthusiasm in the race is no longer his alone; his front-runner’s label appears to have lost its shine.

Colorado GOP Chairman Ryan Call announced just after 1 a.m. that Rick Santorum won the Colorado caucuses, giving him victories across the board in tonight's contests.

Unofficial vote counts Santorum with just over 40 percent, Mitt Romney at 35 percent, Newt Gingrich at 13 percent and Ron Paul at just under 12 percent, according to numbers reported by CNN.

The results are a big surprise — Santorum was expected to do well in Minnesota and Missouri, but Romney's team has a strong organization in Colorado and he was widely expected to pull through there. Romney, who won Colorado with 60 percent of the vote in 2008, even held his election-night party in Denver, while Santorum opted to celebrate in Missouri.