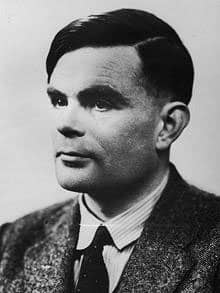 Petitioners recently collected more than 20,000 signatures in an effort to get the UK government to officially pardon Turing.

That won't happen, the BBC reports, as Justice Minister Lord McNally dismissed the motion in the House of Lords:

Mr Turing was one of the key members of the staff at Bletchley Park that worked to crack the German's Enigma codes, and Lord McNally acknowledged that in light of this work he had been treated harshly by the authorities.

"It is tragic that Alan Turing was convicted of an offence which now seems both cruel and absurd, particularly… given his outstanding contribution to the war effort," he said.

"However, the law at the time required a prosecution and, as such, long-standing policy has been to accept that such convictions took place and, rather than trying to alter the historical context and to put right what cannot be put right, ensure instead that we never again return to those times."

Turing's life may soon be the subject of a film, and rumor has it that Leonardo DiCaprio is interested.

Previous Post: « Towleroad Guide to the Tube #1059
Next Post: Rachel Maddow Talks to Ted Olson About the Prop 8 Ruling: VIDEO »