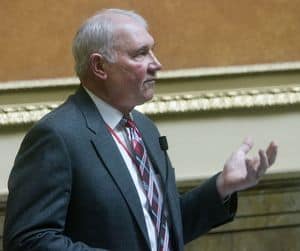 Abstinence-only "sex education" is nearer to becoming a mandate in Utah after the State House quietly passed HB363 by a terrifying 45-28 margin last week. The bills' defenders have been saying weird things. From The Salt Lake Tribune:

"We’ve been culturally watered down to think we have to teach about sex, about having sex and how to get away with it, which is intellectually dishonest," said bill sponsor Rep. Bill Wright, R-Holden [pictured at right]. "Why don’t we just be honest with them upfront that sex outside marriage is devastating?"

Even opponents of HB363 are frightened of sex. The Tribune quotes a Democrat who voted against the bill:

"You cannot speak of abstinence without talking to students about methods of birth control that are not certain, about protecting oneself from [sexually transmitted diseases] and all the things that can happen in a negative sense to a young person who engages in sex ," said Rep. Carol Spackman Moss, D-Holladay. "It’s really immoral not to teach kids about what the consequences are."

With friends like that! Anyway — the bill was debated on the House floor on Tuesday, with both its sexophobic supporters and slightly-less sexophobic opponents eventually hashing out something that somebody might call a compromise. As the bill stands now, schools uncomfortable with abstinence-only can elect to teach no sex ed at all, and nobody will be allowed to teach on the use of contraception.

Note that this is very similar to the law as it already exists. Right now, Utah's educators may teach either abstinence-only or abstinence-only with some instruction on the use of contraceptives, so long as said instruction comes with the admonition that premarital sex is always wrong and dangerous. Alas, that's not strict enough:

"Maybe you’ve noticed that the world has figured out how to populate itself over thousands of years without sex education," said Rep. LaVar Christensen, R-Draper. He said it’s "not good enough" to just avoid advocacy of contraception while teaching students about it.

HB363 is so evil and silly that it's unworthy of editorial dismemberment. What it needs is a song. Roy Zimmerman supplies one AFTER THE JUMP …