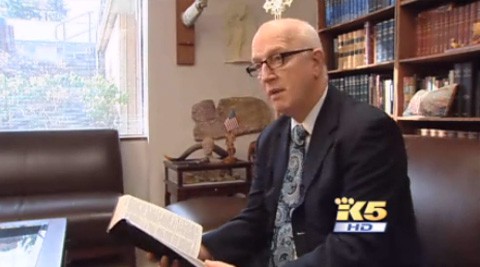 It looks so certain that marriage equality will be signed into law in the coming weeks in Washington state that anti-gay activists and religious leaders like Pastor Joe Fuiten (above) are mobilizing for a ballot referendum that would give the state's voters an up-or-down vote on the issue.

King 5 talks to Fuiten, AFTER THE JUMP….

Fuiten tells Q13 FOX that they've already raised $1 million from out of state but won't say where it came from. (NOM?)

Reuters reports that there are dueling ballot initiatives:

The proposed initiative to define marriage as between heterosexual couples, led by Everett, Washington attorney Stephen Pidgeon, needs to gather 241,153 signatures of registered voters by July 6 to secure a spot on the ballot.

A referendum to repeal gay marriage would only need 120,577 signatures by June 6, but supporters of that measure must wait until after Gregoire signs the bill before starting to collect them.

"My guess is that foes of gay marriage will be going with the referendum challenge, since it takes fewer signatures and it gives a direct vote up or down on gay marriage," said Dave Ammons, spokesman for the Washington secretary of state's office. "The initiative seems to be a backup plan."

Meanwhile, the bill is expected to pass in the Washington House next week.

Watch KING5's report, AFTER THE JUMP…