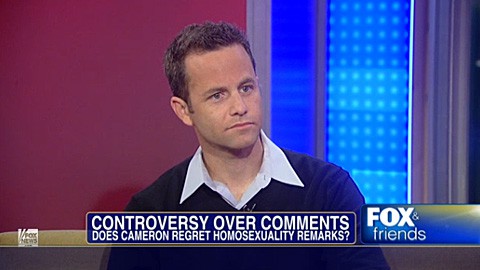 Kirk Cameron is speaking out about the media "bonfire" he accuses Piers Morgan of lighting by highlighting his remarks on same-sex marriage.

"I don't change my feeling about the comments. What disheartens me (is that Piers Morgan took) "some answers, reduce[d] an important and personal and sensitive issue to a four-second sound bite and toss[ed] it into a community to start a political bonfire. [To] really upset people you're saying you're looking to protect…is disingenuous." 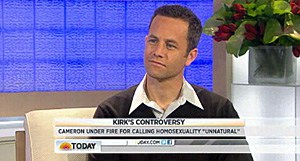 "When my friend who came to me and said you’re the first person I’m telling this to, I’ve known you for 10 years, I’m gay. I could tell how difficult it was. It’s personal. It’s sensitive. It’s difficult. He was nervous what my reaction would be. I said, 'Dude, you know me. I love you. There’s nothing you could ever tell me that would make me not love you and care about you.' If Piers had asked me that: what do you think about homosexuals? What do you think about the gay community?"

On what he'd do if his son was gay:

"It does grieve me to think there are people misunderstanding my heart on an issue. If my kids came to me and said I’m gay, I’d say, 'Son, I love you.' That’s never at stake. Never, never, never at stake. We’ll talk and we’ll go through life together and we’ll work through our thoughts and feelings and we’ll come to what’s healthy. You’ll make your decisions and I’ll make mine."

When Setoodeh asks about gay marriage, Cameron's publicist butts in: "I don’t mean to interrupt. I think we’ve gone enough into it. The gay marriage, I just want to stay away from it. It’s just so polarizing."

Previous Post: « Omar Sharif Jr: I’m Gay, Jewish, and May Be Persecuted in My Home Country of Egypt
Next Post: Cyndi Lauper Has It Out with Madonna Over ‘Girl Gone Wild’ Theft: VIDEO »