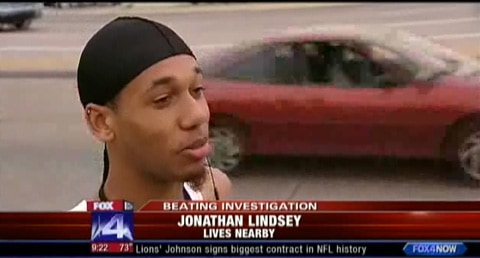 Two men have been targeted in Dallas for their perceived sexual orientation, FOX4 reports:

Police said early Tuesday morning two men who were walking near the intersection of Forest Lane and Audelia Road were attacked. According to the police report, five men pulled up alongside of them and began yelling derogatory gay slurs. Several of the men got out of the car and beat the victims in the face, head and body with baseball bats.

The Dallas Voice has more:

According to a police report, the suspects called the victims, both black males, “fags and sissy” before exiting the vehicle and assaulting them. One of the victims said he was struck at least four times in the head with a bat and lost consciousness until after the suspects left. The other victim attempted to fight back and got caught in the passenger side of the suspects’ vehicle. The suspects dragged the victim an unknown distance before he could free himself.

The victims then transported themselves to Medical City Hospital, according to reports. Officers who responded to the hospital described the victims’ injuries as cuts to the head and nose, bruising and swelling to the cheek and eye socket, chipped upper teeth, and abrasions to the toe, finger, shoulder and stomach.

Laura Martin, LGBT liaison officer for the Dallas Police Department, said the victims’ injuries aren’t life-threatening. Martin said the victims didn’t know the suspects. She declined to say whether the victims are in fact gay, but noted that hate crimes can be based on actual or perceived sexual orientation.

Watch FOX4's report, AFTER THE JUMP…