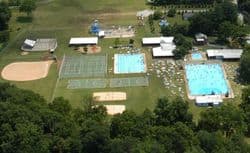 They were turned down, the York Daily Record reports:

Michelle applied for membership at the pool and later received a call from owner Russ Jacobs. Jacobs told her she and her family would be welcome to join, but the discount does not apply to them.

"We don't recognize same-sex marriages," Jacobs said in an interview.

The reason, he said, isn't political; it's economic. He wouldn't bar Michelle and her family or any other family from joining the pool. But Jacobs says if he gives the discount to Gladfelter, he'd have to extend it to grandparents, cousins — you name it.

Jacobs said marriage itself isn't a factor. A heterosexual couple, regardless of whether they're married, would be granted the discount. "I have to draw the line somewhere," he said.

Jacobs did not single out Michelle and her family. In fact, he said, this isn't the first time he's had to deny the discount for similar reasons. Green Valley is a club, he said. It's his bar to set, and he sets it at a man, a woman and, if there are any, children.