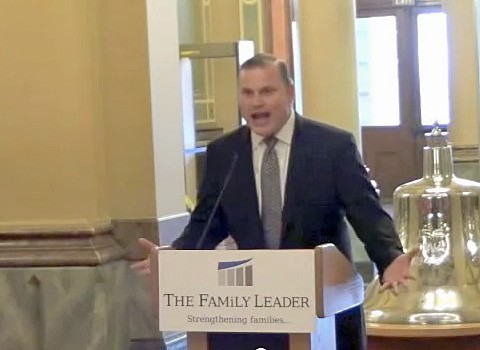 NOM's Brian Brown was on hand with The Family Leader's Bob Vander Plaats yesterday at the Iowa Capitol to demand lawmakers put a constitutional amendment banning same-sex marriage to a vote.

Check out videos of Brown and Vander Plaats' speeches, plus a news report, and a clip of red-shirted 'Family Leader' bigots chanting for the right to vote to take away the rights of gay people, AFTER THE JUMP… 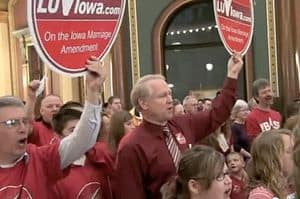 Vander Plaats, a former gubernatorial candidate who led the campaign to oust three state Supreme Court judges after their decision to allow gay marriage in 2010, joined other gay marriage opponents at the Statehouse for a Tuesday news conference. They unveiled petitions, signed by about 20,000 people, demanding that lawmakers debate the resolution that would put the constitutional amendment to a vote.

The Republican-controlled House has approved the resolution, but it hasn't been brought up in the Democrat-controlled Senate. Senate Majority Leader Michael Gronstal, D-Council Bluffs, said he will block debate on the measure during the final month of the session, which is scheduled to end in the middle of April.

Check out videos of Brown and Vander Plaats' speeches, plus a news report, and a clip of red-shirted 'Family Leader' bigots chanting for the right to vote to take away the rights of gay people.

Blogger AKSARBENT has a good report on the counter-protest and response from LGBT rights group One Iowa.

As does Ames Patch:

Democratic senators shot back at Vander Plaats, who unsuccessfully ran for governor three times and is now the front man in the effort to ban gay marriage.

“The truth needs to be told: Bob Vander Plaats needs to get a real job instead of working on spreading a message of hate and discrimination,” said state Sen. Matt McCoy, D-Des Moines, who is openly gay. “It’s time for Bob Vander Plaats to hang it up. He’s been running for governor for what seems like the last 20 years.”