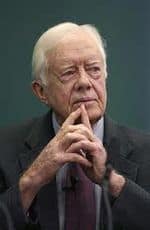 Homosexuality was well known in the ancient world, well before Christ was born and Jesus never said a word about homosexuality. In all of his teachings about multiple things -– he never said that gay people should be condemned. I personally think it is very fine for gay people to be married in civil ceremonies.

I draw the line, maybe arbitrarily, in requiring by law that churches must marry people. I’m a Baptist, and I believe that each congregation is autonomous and can govern its own affairs. So if a local Baptist church wants to accept gay members on an equal basis, which my church does by the way, then that is fine. If a church decides not to, then government laws shouldn’t require them to.