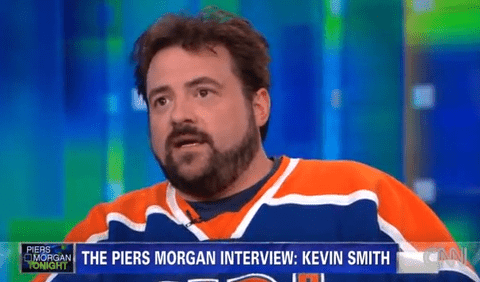 Director and equality activist Kevin Smith took on conservatives who demonize LGBT people during an interview with Piers Morgan yesterday, telling the CNN host the right needs to stay out of people’s bedrooms, specifically his gay, married brother’s.

“I know my brother, he’s a great guy, goes to church, doesn’t screw anybody over, and yet he’s still got some religious yahoos and politicos over to the side going: ‘Change your ways or you’re going to hell,'” he said. “Stay out of my brother’s bedroom, buddy. Like I don’t know what else to tell you. He’s a good dude, as are most people in this world.”

When political figures or religious figures get involved in the bedroom and start wondering what you’re doing behind closed doors, you know it’s going to swing back on them. How many times has it happened where these people who go extremely [right], suddenly you find out are hiding something?

Watch Smith discuss conservative zealots and pornography, AFTER THE JUMP.

Previous Post: « The Dharun Ravi Verdict:
Bias Crimes and the Changing Idea of Privacy
Next Post: DNC Has Already Turned Romney Aide’s Etch A Sketch Gaffe Into An Ad: VIDEO »