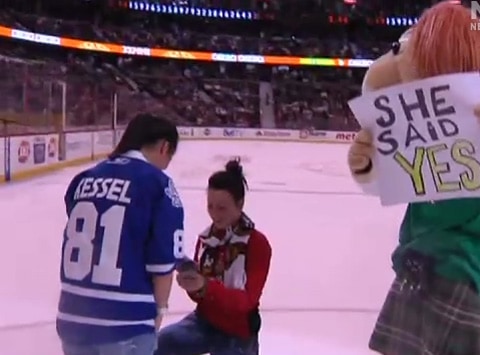 A St. Patrick's Day gay marriage proposal took place at an NHL game up in Ottawa, Canada on Saturday night. 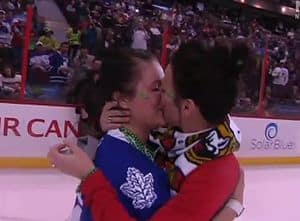 On Saturday night at Scotiabank Place, a Toronto Maple Leafs fan named Alicia stood on the ice during the second intermission wearing a blindfold. When it was removed, she looked up at the video scoreboard and read a message from her girlfriend, an Ottawa Senators fan named Christina.

Schmaltzy music played. Out walked Christina. They embraced and had a brief conversation, as the crowd began to wise up to what was about to happen.

Christina dropped to one knee while holding Alicia's hand. The fans roared. She slid the engagement ring on, they shared a kiss and the Senators mascot proudly raised a sign that read "SHE SAID YES."