At the National Review, NOM's Maggie Gallagher tries to write off the news that her organization had its mask torn off, pronouncing, nothing to see here: 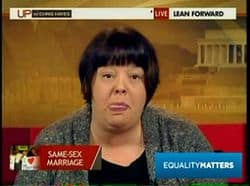 It’s always amusing to watch the media go to work to generate a non-story. In this case, it’s about “secret” documents that show NOM reaches out to black and Latino churches to fight gay marriage.

Mine is: Must be a slow news day over at BuzzFeed.

"NOM's past President and Chair, Maggie Gallagher, doesn't give credit to the Human Rights Campaign's NOM Exposed project, which actually broke the story. But the bigger insult is that she simply doesn't care what Julian Bond, the African American Ministers Leadership Council, or any number of outraged millions have to say about NOM's crude and cruel attempts to divide us as a nation."