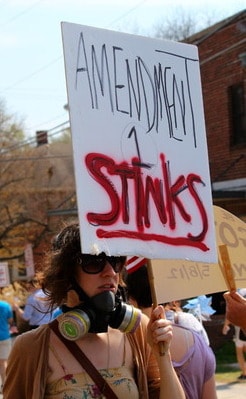 Anchorage isn't the only place where LGBT rights are going to ballot in the near future. North Carolina votes May 8 on Amendment One, which constitutionally bans both same-sex marriage and civil unions.

Campaigners on the ground are putting their nose to the grindstone to stop the discriminatory measure, and bloggers including Towleroad have organized a moneybomb to help defeat it, but a new poll from Public Policy Polling shows the North Carolinian public is still leaning toward prohibition.

The findings also suggest the biggest hurdle to taking down Amendment One may be an ill-informed public.

From the study, via TPM:

Part of the problem is that voters are not well informed about what the amendment does. A 34% plurality say they are not sure on that question. Almost as many (31%) do know that it would ban both gay marriage and civil unions, but then not many fewer (28%) think it would only ban marriage. 7% actually think it would legalize gay marriage.

Meanwhile, Republican Richard Vinroot, the former mayor of Charlotte and a failed gubernatorial candidate who carries a lot of clout in the state, says he opposes the proposed amendment, though not because it's discriminatory. His opposition is based in the fact that North Carolina House Speaker Thom Tillis himself admits Amendment One could be repealed within a decade.

"My reaction [to Tillis], was, ‘My gosh, the legislature wants us to put something in the Constitution that the leader of our party – the speaker of the House – doesn’t think will stand the test of time for more than a decade,’" Vinroot told the Charlotte Observer. “I can’t imagine amending the Constitution for something he believes is that tenuous.”

Previous Post: « More Anti-Trans Messaging In Anchorage Discrimination Battle
Next Post: Julian Bond On NOM Memos: ‘One Of The Most Cynical Things I’ve Ever Heard’ »