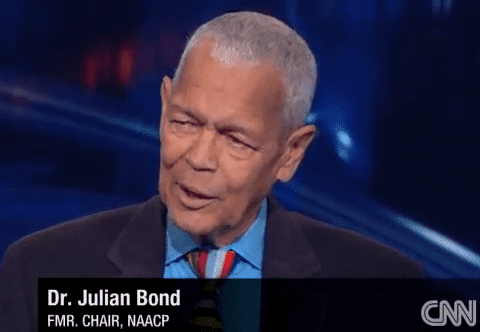 It’s one of the most cynical things I’ve ever heard of or seen spelled out in this way. The idea that these people are just pawned that can be played with — that black people who oppose gay marriage, that  black people who support just can be moved around like pieces on a chess board. It’s scary.

Bond’s no stranger to the equality game, or taking on NOM’s divisive tactics. During the 2009 National Equality March, Bond said, “NOM’s underhanded attempts to divide will not succeed if Black Americans remember their own history of discrimination. Pitting bigotry’s victims against other victims is reprehensible; the defenders of justice must stand together.”

Watch video of Anderson and Bond’s brief conversation, AFTER THE JUMP.

Video via Good As You.