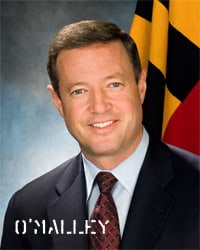 Gov. Martin O'Malley is set for a victory lap today when he signs into law his hard fought measure to legalize same-sex marriage. The signing is set for 5 p.m. in the State House.

There will be waiting, however:

But even with the governor's signature, same-sex couples won't get Maryland marriage certificates until the law goes into effect in January 2013 — at the earliest.

Fired-up opponents have pledged to collect 100,000 signatures opposing the bill by June 30 — about twice what they would need to trigger a state-wide referendum on the topic. On Wednesday several powerful groups joined forces to accomplish that goal. Polls show that Marylanders are evenly split on the issue — so there's no telling what will happen in November.