Al Fischer, a music teacher at St. Ann Catholic School in north St. Louis County, Missouri, was fired earlier this month after church officials discovered he planned to marry his partner of 20 years. Fischer sent a letter to the parents of his students telling them the news, the St. Louis Dispatch reports: 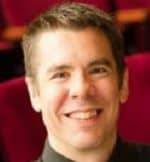 In the letter, Fischer tells parents of "my joyful news, and my sad news" — the former being his plans to marry his longtime partner in New York City, and the latter, "that I can't be your music teacher anymore."

Fischer's partner, Charlie Robin, executive director of Washington University's Edison Theatre, told the Post-Dispatch that the couple's relationship was in no way a secret at St. Ann and that Fischer was fired after a representative of the St. Louis Archdiocese overheard him talking to co-workers about his wedding plans.

Shortly thereafter, according to Robin, Fischer was told he would be fired March 9, the couple's 20th anniversary and the day of their planned nuptials. But after Robin posted the news of Fischer's soon-to-come firing on Facebook on Feb. 16, Fischer was fired the next day, Robin said.

The Archdiocese indicated that Fischer signed a Christian Witness Statement, required for every educator in the Catholic school system: "The Christian Witness Statement, which educators sign when applying for Archdiocese work, says all who serve in Catholic education should, among other requirements, 'not take a public position contrary to the Catholic Church" and "demonstrate a public life consistent with the teachings of the Catholic Church.'"