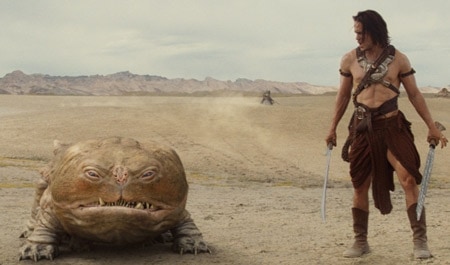 Let's begin with a man and his dog. First, the dog. Woola is an unsightly creature but oddly endearing. He's the size of a pony but he looks more like a lizard or a toad albeit one with six visible legs and hundreds of sharp teeth. He reads all dog though — a mutant pug. His assignment and then devotion is to guard the human prisoner John Carter (Taylor Kitsch).

John Carter of Virginia has been magically transported to Barsoom (aka Mars)  and the green martians who discover him don't know what to make of him though they love his mad jumping skill. Mars' gravity makes John Carter the Earthling a superman, able to leap tall buildings in a single bound. When John Carter tries to escape his prison early in the film, he finds it impossible to elude Woola whose multiple legs carry him across the Martian desert in super sonic zig-zag fashion, clouds of dust trailing behind him like a Road Runner cartoon. The adorable mutant pug always appears wherever bouncy John Carter is about to land. Neither man nor beast are moving in a circular fashion but they're not getting anywhere. Eventually they'll be right back where they started.

Points of origin are important. Home, and our journeys to and from it, are at the heart of John Carter's multi-limbed adventure. The four armed green martians who discover John Carter led by Tars Tarkas (Willem Dafoe) are nomadic and their cities are dying. They do their best to avoid contact with the civil war raging around them on Mars. The moving city of Zodonga is home to the evil Sab Than (Dominic West) who aims to rule the entire red planet. Meanwhile the Princess Dejah Thoris (Lynn Collins) of the beautiful citystate of Helium discovers that her father has arranged for her to marry Sab Than to end the war.

Into this triply divided dying planet lands one John Carter who has been transported from his home to this new one by a magical amulet. We're constantly reminded that John Carter is of Virginia — the martians even mistake it for his name — and he wants to go back there. But when he meets the princess he starts feeling a new kind of gravitational pull.

Would it help you to stay focused to know that in Edgar Rice Burroughs' "Mars" novels interplanetary travel robs John Carter of all of his clothing? 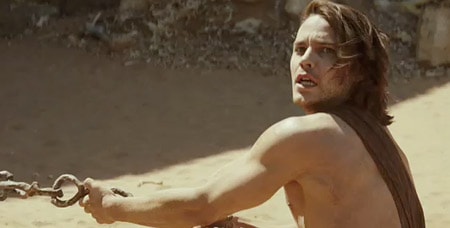 In the first book in the series "A Princess of Mars" John Carter leaves earth clothed but arrives on Mars completely starkers. Burroughs makes a big point of reminding you of just that. The Martian Princess is also naked and describes earth clothing as grotesque. Sadly for fans of Friday Night Light's prime slab of beefcake this particular John Carter arrives on Mars with his "grotesque coverings" intact. The film's modesty isn't surprising since gargantuan budgets require a certain kind of MPAA rating and this also happens to be the first live action feature from Pixar legend Andrew Stanton (Finding Nemo, WALL•E).

You can see the Pixar influence in the confidence of the animation (50% of the characters are CGI) and even, if you're looking hard enough, in the broad strokes of the emotional beats and the storyboarded feel of the setpieces. It turns out that those feel more organic in animated features. 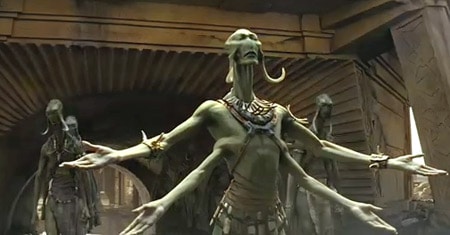 If the plot eludes you, know that you won't be alone. If any movie ever needed a Star Wars style scroll before it began, this is the one. No such scroll appears and there's surprisingly little exposition given that we've been tossed into an entirely alien realm. Or maybe the exposition is just too silly to absorb and it's easy to block out, like the princess theorizing about "the ninth ray" or the confessed destructive strategies of another group of aliens called… oh, never mind. Just sit back, giggle, and enjoy the elaborate visuals. They have the kind of clarity that so often escapes blockbuster cinema which tends to get awfully muddy shoving abundant stuff into ever inch of the frame. Sometimes all you need is a simple image that pops. And thankfully Stanton finds a few here of the comic, action and dramatic varieties.

Whether he finds enough of them for a two hour plus movie is another matter. 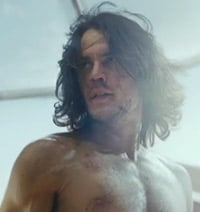 In a recent interview Stanton unfortunately compared the movie to a TV show.

"It’s really like we’ve made the pilot to a season we’re hoping to get."

And that right there is the problem. By the time the movie is finished laying down the groundwork and introducing the characters, it's time to wrap up, giving the movie an odd rhythm which truncates the emotional arcs while overstaying the plot's welcome. The whole experience gives off the faint sensation of those times when you've watched too many episodes of a TV series back to back and cursed yourself for not saving some for later.

I saw people leaving the theater during the drawn out ending just as I myself was losing interest. A late film plot hiccup filled me with momentary dread "There's more?!?" only to thoroughly revive my interest. It helped that the movie seemed suddenly playful about its convoluted plot and suddenly aware of its interplanetary absurdity with a great flash cut timed to an incantation of "Barsoom". But why did it take so long to arrive at that self-aware place?

Woola and John Carter's hyper jumpy erratic zig-zag chase turns out to be a rather perfect microcosm of John Carter the movie. It never sits still as it leaps from planet to planet, from city to city from setpiece to setpiece. But for all its movement it has trouble getting anywhere whether it's airborne or landlocked, laying down Plot Point A or Z (so. much. plot) or roaming Earth or Mars… excuse me Barsoom. 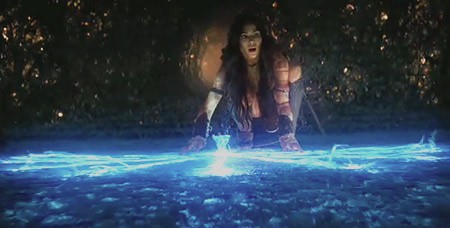