"The Hunger Games," now in their 74th year, began as a way to punish an uprising against the government. The totalitarian regime of Panem (in what remains of the former United States) maintains total control over the outlying districts. Each of the 12 districts is required to send forth two "tributes" annually, a boy and a girl between the ages of 12 to 18 chosen by lottery. They are shipped to the Capital where they are paraded about and then shipped off to die for the amusement of the masses. Everyone in the nation watches. There are no alternatives in this dystopia. Only one adolescent will live bringing supposed honor (and maybe food?) to their starving district… or so claims the capital. What honor there is in forcing teenagers to kill each other is not a question the Capitol asks itself.

Any similarities that THE HUNGER GAMES has to the Japanese classic Battle Royale (2000), which also features schoolchildren forced to kill each other by a totalitarian regime — only one survivor allowed — are, according to The Hunger Games author Suzanne Collins, entirely coincidental. Another film in this subgenre, the little seen Series 7: The Contenders (2001) also features mandatory lotteried killing for televised amusement. In short, the ideas are nothing new, just the treatment; these are topics we're obviously grappling with in popular culture in this era of televised "reality" and winner takes all capitalistic vice. The gap between the haves and have nots grows and this dystopia gives it steroids.

When 12 year old Primrose Everdeen (Willow Shields) is named as tribute in "The Reaping" ceremony, her protective sister Katniss (Jennifer Lawrence) volunteers to take her place. The district also sends Peeta (Josh Hutcherson) a sweet strong baker's son who Katniss knows a little. Will they kill or be killed?

They're off and running… AFTER THE JUMP…

The first hour plus of Hunger Games is touching and quite visually intriguing, "The Reaping" sequence is especially memorable with Effie (Elizabeth Banks) a flamboyant disconcerting fuschia in a sea of grayed out zombie teenagers fearing their name read aloud. The last hour, the actual games, paradoxically thrills less. 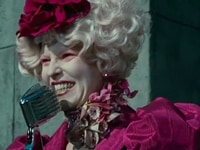 I have not read the novels so the world building was fascinating and even semi-plausible. For the most part director Gary Ross (Seabiscuit) delivers an artful scifi drama. Particularly impressive are the sound and scoring, both less bombastic than this type of film usually receives and more affecting for it. When a contestant dies there is a low "boom" that's surely intended for the combatants to keep count (since the Panem audience will already know who has died) but it adds to the dread. Consider it an artistic reminder that less can be more since the offscreen deaths are just as unsettling as those we witness.

Once the tributes reach the arena, basically a forest with clearings, the slaughter begins. The initial bloodbath is filmed mostly in blurry handheld camera and incoherent quick edits (as are most subsequent action sequences), either because Ross has little feel for action, because coherent editing is out of style or because the R rated material wanted a PG-13 for a bigger box office reach; I'm guessing all three. He's also overly fond of foreshadowing and controlling where you're looking on the screen even when several people are in frame. Even if you haven't read the books it's easy to sense who will live longest based merely on who the camera asks you to look at. And one thing above all else becomes clear – this movie belongs solely to Jennifer Lawrence and cares possibly more about how wonderful Jennifer Lawrence is to look at than the sorry plight of teenage tributes as cruel pawns in a snuff film.

There are 24 tributes but you wouldn't know it to look at her.

I didn't know where to begin in reviewing The Hunger Games which is specific enough as a concept to excite immediate feeling but vague enough as a metaphor to invite all sorts of projections. Like many pop culture phenomenons, what you bring in to the theater is half of the experience. The Hunger Games will surely spark a lot of conversation as the angles are endless: man's inhumanity to man as entertainment — with us since the days of the Gladiators; Television as the opiate of the masses; The politics of wealth distribution; Our complicity in the perpetuation of our own misery; Etcetera.

The Hunger Games flexibility with metaphor even extends to mass market entertainment and actors as celebrities. Katniss and Peeta are styled and primped before public apperances preceeding the games and they're repeatedly encouraged to be "likeable" so that they'll win sponsors. The movie hedges its bets this way too, employing the reliable trustworthy Disney tactic of not really making the heroes kill people unless its indirectly. (It might make them more likeable but it also kills some of the psychological horror the concept promises.)

The showbiz doesn't end there. Katniss's mentor Haymitch (Woody Harrelson) even encourages her to amp up the drama during the games and she complies. The best thing about Jennifer Lawrence's work here might be the occasional beats of ambiguity — you're not entirely sure how much her feelings for Peeta are real or amplified for survival, and when she acknowledges the audience on occassion, how much is she really feeling? The Hunger Games will surely make Jennifer Lawrence, who came to fame with an Oscar nominated turn in the poverty-stricken drama Winter's Bone, a huge star.

Curiously in both films she plays a destitute but resourceful Appalachian girl who kills squirrels and who happens to be her sister's proxy mother since the real one is terrible at the job. It may be the tiniest niche an actress has ever inhabited but Lawrence is a very big deal.