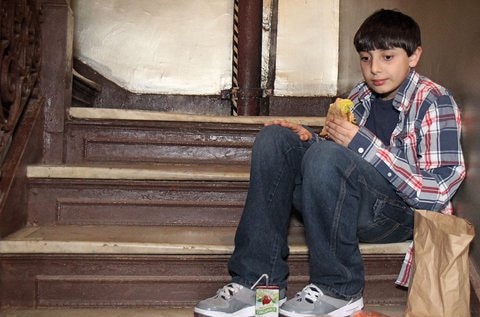 McElroy, who sources reported has been called "faggot" on 43 separate occasions in the past month, confirmed his favorite lunch spot is strategically located on the exact opposite end of the building from both the gymnasium and the hall most frequented by the school's eighth-graders.

The 12-year-old also told reporters it "felt cool" knowing he had a little corner of the school largely to himself for a moment.

"It's good that the staircase is also near the band classroom, in case I need to run there for help," said McElroy, adding that the band teacher, Mrs. Maki, is nice to him and always smiles and says hello. "I used to try to sneak my lunch into the library, which I liked because I could read. But a librarian caught me and told me I wasn't allowed to bring food in there anymore, so I had to stop."

Watch the accompanying video, AFTER THE JUMP…

A petition on Change.org objecting to the item has already popped up. No doubt there are those who will think this is an overreaction and people just aren't 'getting' the article. Would a bullied kid reading this article find hilariousness in his own situation? Do formerly bullied LGBT adults find humor in it? How 'bout the parents of a teen who killed himself? I didn't crack a smile. I'm usually a big fan of The Onion. Satire is best used to criticize or poke fun at stupidity or vices. Bullied teens fit into neither of those categories.


Gay 12-Year-Old: 'I Like Eating Lunch Here By Myself'