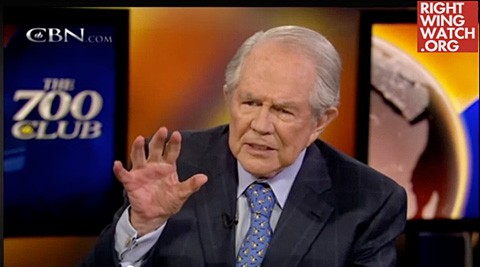 On today's 700 Club, Pat Robertson told a woman to reject her lesbian sister's invitation to be a bridesmaid in her wedding, Right Wing Watch's Brian Tashman reports.

"….if you go what you’re doing is saying ‘I bless this union and I agree that what you’re doing is right.’ You know the Bible is so clear about homosexuality and when you read in what Paul said, he said, ‘Wherefore God gave them up,’ and having given them up they did evil things with their own bodies, men for men and women with women, defaming their bodies. Read Romans, read the Book of Romans, this isn’t something I came up with, read it in Romans. You say, ‘should I go to my sister’s wedding, should I participate,’ the answer is to tell your sister, ‘I love you but I cannot participate a ceremony that is contrary to God’s word, period.’"

Added Robertson: "If she doesn’t like it, if that breaks the union between you, that’s tough luck."