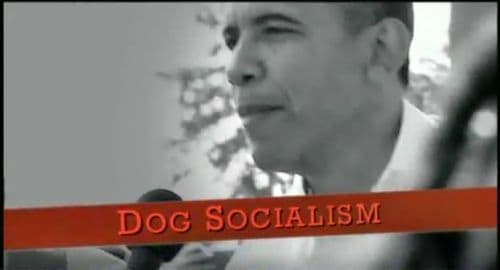 The treatment of dogs has emerged as an unlikely issue in the 2012 American presidential campaign. Perhaps it began last year when Gail Collins, the politicomedic columnist for the Times, felt moved to include a reference to Mitt Romney's Irish Setter, Seamus, in seemingly every column she wrote between April and November. Whenever it began, eventually everyone was talking about Seamus — about how, when the Romney family went on a road trip, Mitt would put the dog in a kennel and strap the kennel to the roof of his car; and how on one memorable occasion the terrified (you'd think) and/or ecstatic (if you believe Mitt) pooch defecated into the slipstream, forcing Mitt to make a rare roadside stop to clean up.

Well — for a while now, the leading Romney-related Google search has been "Romney dog," which was obviously annoying to Mitt's campaign. To even things up, one of Mitt's staffers let slip a few weeks ago that Barack Obama has actually eaten a dog, which is true. Obama admitted to it in his autobiography.

Because of all this, last night's White House Correspondents' Dinner was full of dog humor. "Which reminds me of an old joke," said Barack Obama, after mentioning Sarah Palin. "What's the difference between a hockey mom and a pit bull? A pit bull is delicious." The audience didn't quite know what to make of that.

And then Obama shared some choice words with the cynical dogbaiters behind this SuperPAC ad, AFTER THE JUMP …

(If you'd prefer to watch Obama's speech in its entirety, click here.)