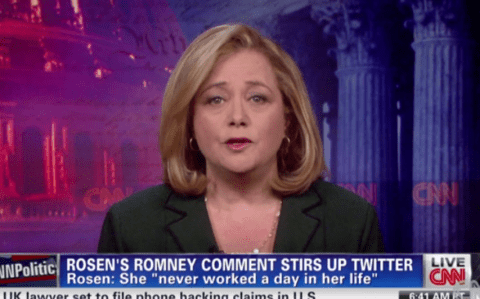 Democratic strategist Hilary Rosen today apologized for saying on Anderson Cooper 360 that Ann Romney, wife of presidential candidate Mitt, was not a good source of economic policy because has "never worked a day in her life."

Here's what Rosen said in her statement of contrition.

Let’s put the faux ‘war against stay at home moms’ to rest once and for all. As a mom, I know that raising children is the hardest job there is. As a pundit, I know my words on CNN last night were poorly chosen. In response to Mitt Romney on the campaign trail referring to his wife as a better person to answer questions about women than he is, I was discussing his poor record on the plight of women’s financial struggles …

As a partner in a firm full of women who work outside of the home as well as stay-at-home mothers, all with plenty of children, gender equality is not a talking point for me. It is an issue I live every day. I apologize to Ann Romney and anyone else who was offended. Let’s declare peace in this phony war and go back to focus on the substance.

The remark sparked an immediate firestorm, inspired Mrs. Romney to join Twitter and has the Democratic National Committee doing all it can to distance itself from Rosen.

Don't worry, though, Rosen; some other mini-scandal will come along and this will become a thing of the past. Or maybe people will just realize it was an off-the-cuff remark that doesn't deserve this level of outrage.