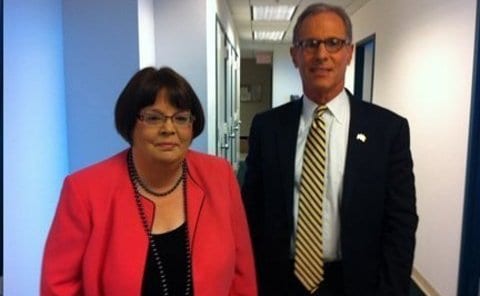 I've included the text from an email he sent on the subject today, AFTER THE JUMP, as well as some video of Karger and Gallagher on Thomas Roberts' MSNBC show.

Is Maggie Gallagher Divorced?
Moved to Washington 3 years Ago Without Mystery Husband

I was on Thomas Roberts’ show MSNBC Live with the founder of the National Organization for Marriage, Maggie Gallagher. We were on MSNBC so she could try and defend the treasure trove of “Confidential” NOM documents that had just been uncovered as a result of the 2009 investigation that I got launched against NOM in Maine.

Maggie and I were in separate studios although we met afterwards for this photo and a chance to visit.  I asked Maggie if she was still living in New York, and she told me that she moved to Washington, DC nearly three years ago.  What about her husband Roman Srivastav?  She allegedly married this East Indian man 19 years ago after living as an unwed mother for 11 years.  No one has ever seen Maggie with Raman.  Wonder if they really did get married?  If so, maybe so he could get a green card?

(Big-o-crite ˈbig-ə-ˌkrit – a person who is both a bigot and a hypocrite.)

For the past 15 years Maggie has written books, columns and talked to anyone who would listen about the necessity of kids having a mother and a father (even though she didn’t follow her own advice for over a decade).

In 2008 Maggie took it up a notch and started the National Organization for Marriage with $3 million dollars to qualify and pass California’s Proposition 8 to take marriage away from millions of Californians.  NOM has been labeled a “Hate Group.”

According to WikiAnswers only 9.3% of American women don’t wear a wedding ring, a pretty small number.  Certainly this national champion of marriage whose twitter name is @MaggieMarriage would wear a wedding ring if she was really married.

I first became suspicious when you spoke in Rhode Island two years ago at NOM’s "Celebrate Marriage & Family Day."  If ever there was a day to appear with your husband that was it.

I even scoured Google images, not one photo of you and Raman.  NOM’s Brian Brown is all over Google.  There are lots of photos of Brian with his wife and family.

I smell a rat, Maggie. You are the author of a book is titled “The Case for Marriage: Why Married People are Happier, Healthier, and Better off Financially (on Amazon for only $1.00).” Makes sense to me. But why are you so hell-bent on making sure that those of us who happen to be gay, lesbian, bisexual and transgender can’t marry?

Put up, or Shut up