Lambda Legal sued the the Waynesville School District today on behalf of Maverick Couch, a high school student who wore a T-shirt with a rainbow Ichthys and a slogan reading “Jesus Is Not a Homophobe” in observation of the National Day of Silence. 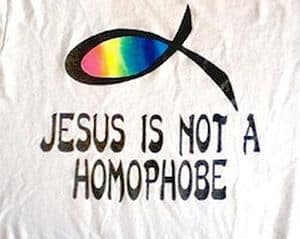 The school principal, Mr. Randy Gebhardt, called Maverick into his office and instructed him to turn the T-shirt inside out; Maverick complied. Maverick went home and conducted some research and concluded he should have the right to wear the T-shirt, and wore it again the following day. He was again summoned to the principal’s office, his mother was called into the school, and was told to remove the T-shirt or face suspension; Maverick again complied. Over the summer, Maverick further researched his First Amendment rights, and when school resumed in the fall of 2011, he approached the school principal seeking permission to wear the T-shirt. Mr. Gebhardt restated that he would be suspended if he wore the shirt.

In January 2012, Lambda Legal sent a letter to Mr. Gebhardt outlining the legal precedent supporting Maverick’s right to wear the shirt, to which the school district issued the response, “…the message communicated by the student’s T-shirt is sexual in nature and therefore indecent and inappropriate in a school setting.” On April 3, 2012, Lambda Legal filed suit against the Wayne Local School District on Maverick’s behalf, arguing that the Waynesville School District violated the First Amendment and well-settled legal precedent supporting students’ free speech.

More informatino on the case can be found at Lambda Legal's site.