Last week, the Supreme Court considered the constitutionality of the Affordable Care Act, a law that owes part of its existence to Senator Olympia Snowe and may owe its future to Justice Anthony Kennedy. And, if we listen to gay rights commentators, Justice Kennedy will likely decide the fate of California's Proposition 8, the Defense of Marriage Act (DOMA), and any other gay rights cases that comes to One First Street. 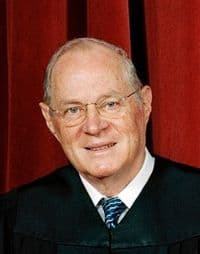 The fate of controversial laws has hinged recently on support from "moderates" — from the retiring Senators from Maine (Ms. Snowe), Connecticut (Joe Lieberman), and Nebraska (Ben Nelson), to the sometime swing votes on the Supreme Court (Justice Kennedy and Justices Sandra Day O'Connor, Lewis Powell, and Byron White before him). But, the moderate moniker is a flexible and varied term. Most casual observers believe that the moderate position is contingent upon some measure of equilibrium between the political poles of the day that would shift as the poles shift disproportionately.

Based on the myriad of online political quizzes, a "moderate" is someone who has conservative positions half the time and liberal positions the other half, or combines varied views and varied degrees of passion for those views until an algorithm spits out a midpoint. Political sociologists find moderation in the easing of rigidity and the willingness to compromise regardless of the particular issue. And, it is reasonable to believe that a moderate jurist at the Supreme Court should be different than a moderate politician in the Senate. It is, then, not so clear who is a moderate and why.

This question matters for three reasons. First, if we know what moderates look like, we can determine if Justice Kennedy is indeed one, giving us better tools to predict his decisions and sway his vote to our side. Second, if moderates are inconsistent opportunists rather than principled pragmatists, we can stop lamenting their supposed departure from the political and legal arenas. And, third, if moderate jurists are political rather than doctrinal (that is, if they just have slightly less liberal or conservatives views than their peers rather than operate under a governing constitutional theory of moderation), then the ideal of an apolitical judiciary is out of reach.

One theory about what makes a moderate jurist is humility: the respect for precedent, or what constitutional lawyers call stare decisis, and a light touch keeps the jurist from doing anything more than answering the question before him in the most narrow way. This theory can explain some machinations of the modern court, but it fails the test of history.

Humility is a governing doctrine of moderation at the Court because the judge's particular political beliefs are irrelevant: if long-held precedent says x, then stare decisis (roughly, Latin for "to stand by that which is decided") says you should not overturn it unless there is a really compelling reason to do so. Being a humble jurist is not just listening to your forebears; it is also leaving the next generation room to grow by only deciding cases narrowly and directly addressing the legal question at hand in the least disruptive way. That is, if you get the same just outcome by either (a) tossing out 150 years of precedent or (b) carving out a narrow exception to that precedent, you should choose (b). 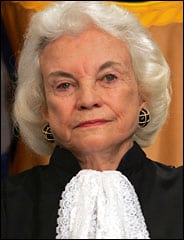 A number of Supreme Court scholars think that this describes Justice O'Connor's tenure quite well. Her swing vote tended to uphold precedent, even in controversial cases, much more often than not. In Planned Parenthood v. Casey, Justice O'Connor wrote a plurality opinion that upheld the core of Roe v. Wade, but accepted certain state limits on abortion as long as they did not impose an "undue burden."

And, in Lawrence v. Texas, Justice O'Connor tried to have it both ways in her concurrence: she wanted to retain Bowers v. Hardwick by dismantling Texas's anti-sodomy law as a violation of the Equal Protection Clause rather than the Due Process Clause. In these and a litany of other cases too numerous to discuss here, Justice O'Connor sought fidelity to the Court's institutional memory through respect for precedent and a humble view of her role.

Justice Kennedy's predecessors did not fit the O'Connor "moderate" mold. Justice Byron White, who wrote the majority in Bowers, was a Kennedy-appointee, a liberal when it came to economic legislation, but a traditionalist in the face of growing social justices movements for women and gays. Liberalism matured; he did not. Justice Hugo Black, a New Deal liberal, thought there was no such thing as a right to privacy and wrote vociferous dissents in student speech and sexual liberation cases. And, yet, he believed in universal incorporation of the Bill of Rights to the states (something even liberal lions like Justice William Brennan didn't touch). Justices White and Black are moderates in the mold of the political quiz: Type in your views, however conservative or liberal they might be, tell us how important each of those views are, and we'll spit out a number along 1 to 100. If you're near 50, you're a moderate. 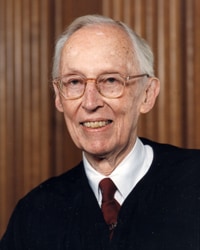 And, Justice Powell, Justice Kennedy's immediate predecessor, was yet another type of moderate: the compromiser. For example, in Regents of the University of California v. Bakke, Powell wrote alone to offer a compromise between Justice Brennan's majority, which upheld affirmative action programs under a lenient judicial test, and Justice John Paul Stevens's dissent, which rejected most affirmative action programs at the university level. Powel wanted strict scrutiny applied to affirmative action programs, but was clear that some programs would survive that high hurdle. Powell also dissented in Furman v. Georgia, which invalidated capital punishment, but, according to his biographer, was the key force behind Gregg v. Georgia, which reinstated death penalty statutes four years later as long as they contained significant due process safeguards.

Justice Kennedy's moderation does not seem to fit any of these models. He wrote Lawrence v. Texas and seems to have grave concern for state interference with personal liberty, but just released a decision in Florence v. Board of Chosen Freeholders upholding the use of strip searches on uncharged arrestees without probable cause. A number of scholars have suggested that Kennedy simply assumed the responsibility of the moderate swing vote after Justice O'Connor retired not because of any particular moderation in his ideology, but because of his institutional belief in the value of balance on the Court. In his first few terms on the Court, he was second only to Justice William Rehnquist in siding with the conservative bloc. Yet, with Justice O'Connor gone, he has upheld the Clean Water Act, rejected unilateral executive power, and upheld federal regulation of interstate commerce.

It is beyond the scope of this column to analyze justice decision-making in great detail. There are fascinating studies that show, for example, the rates at which different justices are in the majority, uphold precedent, change their minds, or make so-called "conservative" or "liberal" decisions as defined by the politics of the day. Suffice it to say that these studies and our brief review of some notable Supreme Court moderates since the 1960s suggest that there is no one definition of a moderate jurist.

Yet, the term bandies about indiscriminately. Media personalities see four conservatives, four liberals, and one "moderate" on the Court. Legal academics are not much better: Nearly 550 law review articles on Westlaw (the online research tool for lawyers) call Justices Kennedy or O'Connor the "moderate" justices on a "polarized" or "divided" Supreme Court. It seems, then, that the only honest description of a moderate jurist is one who roughly half the time sides with the known conservatives and roughly half the time sides with the known liberals, regardless of any overarching doctrine of moderation.

Consider the Martin-Quinn Scores, a statistical method named for Professor Andrew D. Martin of the Washington University School of Law and Professor Kevin M. Quinn of the Berkeley School of Law that analyzes political views at the Supreme Court. By looking at how often judges vote with one another, among other variables, Martin-Quinn not only paints a year-by-year picture of the Court's political position, but it also identifies the gulf between each justice as to their frequency of siding with each bloc, thus identifying the reliable liberals, reliable conservatives, and true swings. Under this view, Justice Kennedy is now the undisputed swing vote, like Justices O'Connor and Powell before him.

But, the evidence stops there: There appears to be no legal doctrine to explain a governing theory of moderation at the Court. This is lamentable. Respect for precedent and humility have the great benefit of protecting the institutional respect of the Court, and we should strive for the judicial ideal that of judges who are above politics, faithfully interpreting the law honestly and consistently. If Martin-Quinn gives us the best elucidation of moderation at the Court, that ideal is lost.