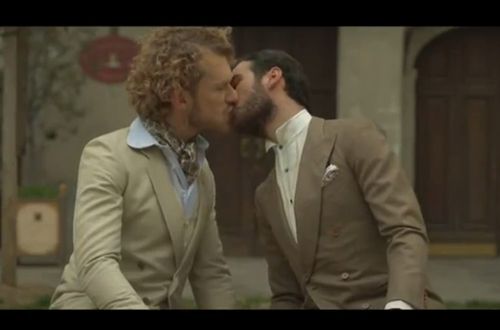 Adorable, sassy short film about two lovers in an Italian town who dare to defy convention: watch AFTER THE JUMP …

Wal-Mart is even worse than you thought. A New York Times investigation finds massive bribery network devoted to attaining and maintaining market dominance in Mexico:

Turmoil at Wal-Mart: The Players

The former executive gave names, dates and bribe amounts. He knew so much, he explained, because for years he had been the lawyer in charge of obtaining construction permits for Wal-Mart de Mexico.

Wal-Mart dispatched investigators to Mexico City, and within days they unearthed evidence of widespread bribery. They found a paper trail of hundreds of suspect payments totaling more than $24 million. They also found documents showing that Wal-Mart de Mexico’s top executives not only knew about the payments, but had taken steps to conceal them from Wal-Mart’s headquarters in Bentonville, Ark. In a confidential report to his superiors, Wal-Mart’s lead investigator, a former F.B.I. special agent, summed up their initial findings this way: “There is reasonable suspicion to believe that Mexican and USA laws have been violated.”

The lead investigator recommended that Wal-Mart expand the investigation.

Instead, an examination by The New York Times found, Wal-Mart’s leaders shut it down …

The Democratic Party has been and always will be the Party committed to fighting for equality for all Americans,” Gonzalez said. “As an individual Member of Congress, marriage equality is an issue which I support. During the platform writing process, ideas and opinions will be considered from our diverse Democratic Party family, and I understand that the President and the Party are committed to crafting a platform that reflects our values and a belief that America is a nation in which everyone deserves a fair shot and hard work is rewarded. I fully expect that my opinion, and the opinions of others, will be an important consideration in reaching a consensus in drafting our party’s platform …

He helped resurrect Richard Nixon back from political death in '68, pioneered the use of "dirty tricks" (aka: "rat****ing") in American elections, inspired the careers of Lee Atwater and Karl Rove, and turned to Jesus after going to jail. Now Chuck Colson is dead.

Speaker of Australia's House of Representatives allegedly fell for gay staffer in the skeeziest possible way.

Owner Mohammed Awaida said he opened the "South Forest Park" in 2007, only to lose a number of animals during Israel's military offensive against Hamas that began in December 2008. During the three-week offensive, launched in response to rocket attacks on Israel, Awaida said he could not reach the zoo, and many animals died of neglect and starvation.

"The idea to mummify animals started after the Gaza war because a number of animals like the lion, the tiger, monkeys and crocodiles died," he said. "So we asked around and we learned from the Web how to start."

Formaldehyde and sawdust provided the basic tools, though Awaida acknowledges he is no expert.